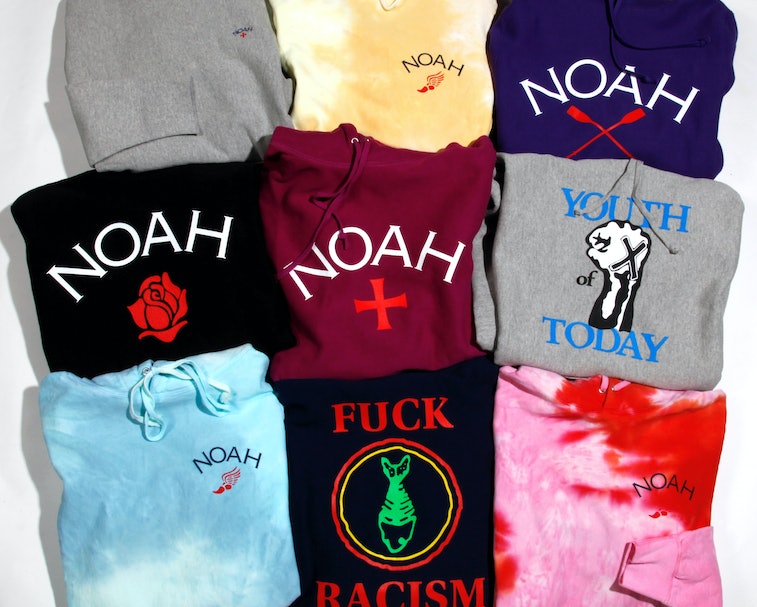 Sale season is well underway, bolstered only further by the unfortunate closings of Totokaelo and Need Supply. Little did we know that the holy grail was yet to come, as Noah has announced an archival sale with up to 80 percent off.

The grown-up streetwear brand from former Supreme director Brendon Babenzien will release pieces from its first five years of business — Noah relaunched in 2015 after its original five-year run beginning in 2002 — including one-off samples, unreleased goods, and apparel that has no longer been available. Vintage pieces and memorabilia acquired by Noah will also be available as part of the sale, which begins this Thursday but will open up a day earlier for email subscribers.

What's up for grabs? — The mystery is a large part of the appeal, but Noah has given some idea what'll be included via photos. There'll be no shortage of T-shirts, hoodies, and sneakers — the latter of which will include Noah's long-running collaborations with Vans and Sperry.

From what we've already seen, the hoodie lineup should be the most enticing. It includes several variations of the brand's core logo, including the Knight's Templar cross, winged foot, and rose. There's also the Rowing Blazers collaboration from 2018, and fans of Noah will have their fingers crossed for any of The Cure hoodies to resurface. The logo hoodie adorned with the same flowers from the Disintegration cover is among Noah's most coveted pieces and has resold for more than $300.

Otherwise confirmed are a range of hats and belts, as well as many of the shrewd patches released across the years. But the real good stuff should come from the cut-and-sew pieces, which have cemented Noah as the go-to brand for streetwear fanatics who've gotten older and become more drawn to looking handsome.

You'll be checking Noah out on the daily — After the sale opens to the general public, new pieces will be added on a daily basis. I, for one, am looking forward to the anxiety induced by trying to decide if I should pull the trigger on something in front of me or hold out for the possibility of something even better going up for sale. Not to mention the subsequent anxiety from inevitably dropping far too much coin. But it can't be irresponsible when it's discounted, right?

Scroll through more of what will be available below and keep your eyes out for surprises as the sale goes on.