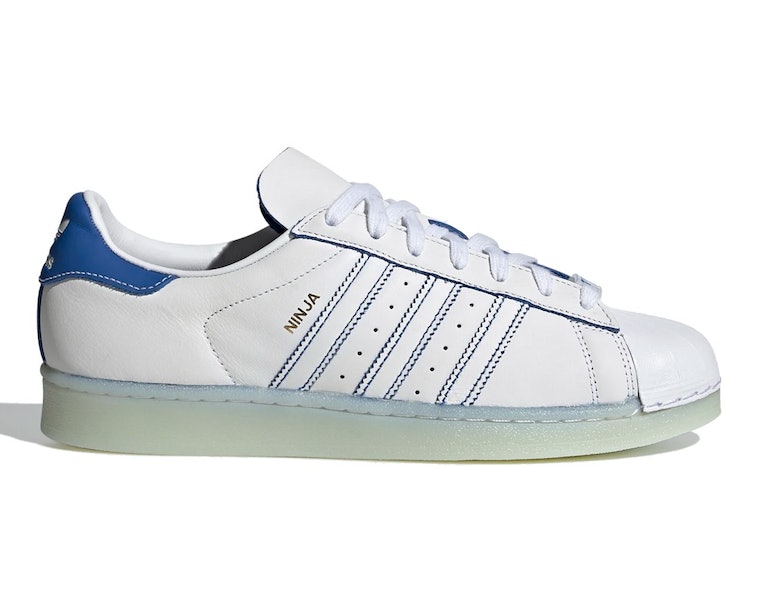 Ninja and Adidas have followed up their first collaboration, the Nite Jogger, with the streamer's second collaborative shoe. The Superstar, which Adidas has been pushing hard this year, has been done up for Ninja with his signature shade of blue and an icy midsole. His name replaces the typical "Superstar" hit in gold foil atop the three stripes, while his "Time In" slogan appears once again, this time on one of the lace deubrés. On the other side, Ninja's logo gets the honors.

Those details keep the lateral side of the kicks clean, but a faint gold digital pattern adorns the upper on the medial side. Altogether, the Superstar is a much more modest shoe than his last Adidas collab — which goes to show that alterations for the classic silhouette are best kept to a minimum.

None of that "made for gaming" BS — Sneaker companies trotting out "performance" sneakers in hopes of cashing in on the cow that is modern gaming has become a major pet peeve of mine. E-sports athletes aren't exactly known for what they do with their feet, so why bother with a hollow explanation of how a sneaker will help them? It's not as if Yeezy says its shoes will make Kanye West a better musician or performer (although I'd try anything to make him less infuriating at this point).

Adidas has the right idea by treating Ninja more as a personality instead of an athlete. Make a shoe that embodies his personality and story and move on. It should be that simple.

Ninja has already helped lead Adidas' Superstar campaign — Ninja and Jonah Hill, who also has his own sneaker, have been the face of Adidas' Superstar revival. The shell toe sneaker, first introduced in 1969, is essentially its version of the Nike Air Force 1. Both were originally introduced as an athletic shoe but have evolved into more of a lifestyle piece as technology has left them behind. With how hard Nike has been pushing the AF1 over the past few years, it makes sense for Adidas to counter with the Superstar.

Stay tuned for a stateside release — For now, Adidas has only announced release details for the U.K. There, it'll drop this Saturday, August 8, for £100 (~$130). Given how massive of a following Ninja has, a U.S. release is surely in the pipeline. And after that, a Ninja ZX Torsion should be on the way, too.