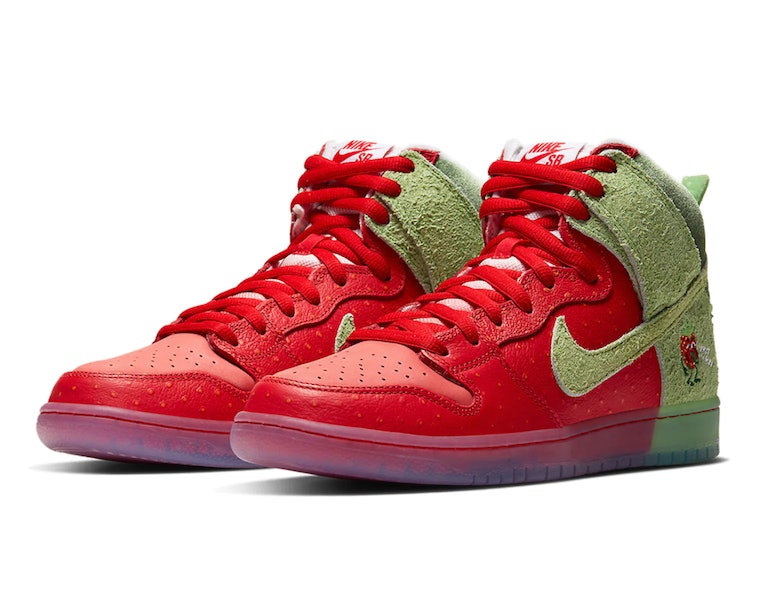 Nike SB’s mythical “Strawberry Cough” Dunk — originally slated for release in 2020 — is finally dropping this month. Designed by Todd Bratrud, the artist behind other weed-themed sneakers like the “White Widow” and infamous “Skunk” Dunk, the “Strawberry Cough” Dunk commemorates the cannabis strain it’s named after with hairy green suede panels and a coughing strawberry graphic.

Leaked images of the sneaker have circulated the internet since early 2020, back when we thought a launch was impending, but soon enough, the pandemic limited production and made the Dunk’s strain name a bit insensitive. With not one, but two 4/20 holidays gone by, sneakerheads and stoners alike lost hope of the Dunk High ever releasing.

We’re not complaining, but why now? — Yet official photos of the “Strawberry Cough” Dunk appeared this July, setting fans ablaze — most likely in multiple ways. Still, there was some confusion on what occasion the pair would celebrate. While stoners, and some sneakerheads, don’t necessarily need a reason to light up, it’s unclear why Nike SB would choose to launch the cannabis-themed pair on a day other than 4/20.

The brand is notorious for celebrating the stoner holiday with annual Dunks, and given fans already waited a year, a “Strawberry Cough” release would’ve been welcomed come next 4/20 — save for those who never expected the shoe to drop, and already spent thousands of dollars to buy one of the few circulating pairs via resale. Since its creation, the “Strawberry Cough” Dunk High has been surrounded by online hype: The sneaker’s costly resale prices prove consumers are willing to pay anything to finally see the cannabis-themed pair come to life.

Perhaps Nike is including the pair with its Halloween offerings, given its almost gaudy look. Already, the October holiday is known to be filled with smoke and the inevitable (and usually overblown) threats of laced trick-or-treat candy.

Light ‘em up — Once again sparking people’s interest — among other things — the “Strawberry Cough” Dunk High sneakers feature red dimpled leather and hairy green suede panels to replicate the texture and look of strawberries, as well as other leafy greens. A coughing strawberry graphic, seen on the heel and insoles, nods to the strain the Dunk is named after, while a soft green heel tab has been added for further reference. Translucent soles wrap up the funky “Strawberry Cough” design, which comes to fruition soon (no pun intended).

The sneakers are set to retail for $110 a pair; a steal considering their resale value. But like any Nike SB release, the thematic shoes will launch first at select skate shops on October 22. Only on October 26 will everyone have access to the “Strawberry Cough” Dunk High on SNKRS — although the release will undoubtedly be limited through a draw. Consider it best to stall your festivities until after their launch: You wouldn’t want to miss out on this legendary pair.