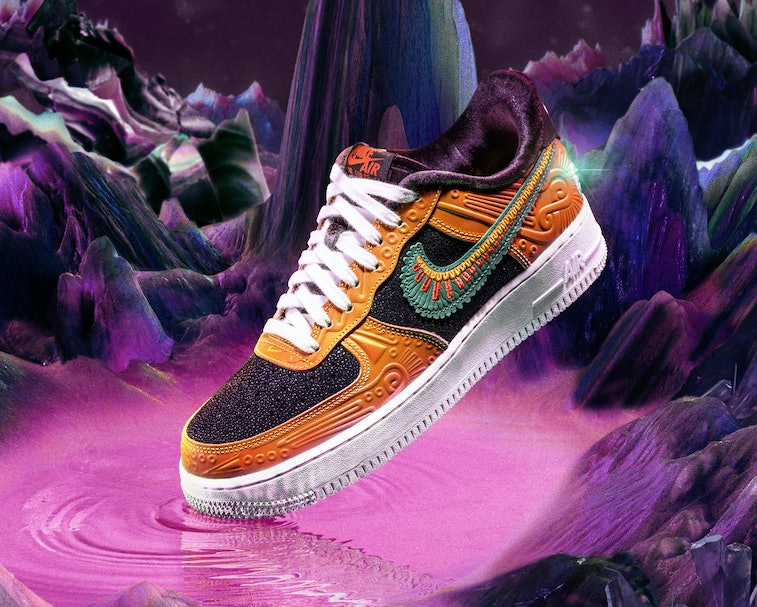 Nike has officially revealed its annual Día de Muertos sneaker assortment, and what it lacks in quantity it more than makes up for with highly detailed embroidery.

Both an Air Force 1 and Air Jordan 1 are treated to raised materials and colorful embroidery for some of the most fetching sneakers you’ll see all year. The head-turning designs are intended to illustrate Mictlán, the underworld of Aztec mythology consisting of nine levels to be traversed in a journey that takes approximately four years.

In the seventh level of Mictlán, a person must cross a river of blood filled with jaguars — which comes through on the Air Jordan 1’s black and blue jaguar print with teeth extending from the tip and over the vamp. The Swoosh is then transformed into an ornate arrow, representing one of the items Aztec men were buried with for help in their journey through Mictlán.

The Air Force 1 is no slouch either — While the Air Force 1 “Día de Muertos” doesn’t bear as clear of a connection to Mictlán, it’s no less striking than the Air Jordan 1. Natural-toned leather panels feature raised Aztec imagery and contrast with a vamp and quarter made out of tiny black beads. An embroidery style native to Mexico is also used for the Swoosh and brings just a dash of color.

Releasing alongside the sneakers will be a small assortment of apparel that borrows from Mictlán, including a bomber jacket with embroidery of the jaguar, iguana, and Xolo dog — the latter of which serves as a guide for souls in the afterlife. The full collection is scheduled to release this Sunday, October 24, through the SNKRS app and is an immediate contender for the best Día de Muertos drop that Nike has done yet.