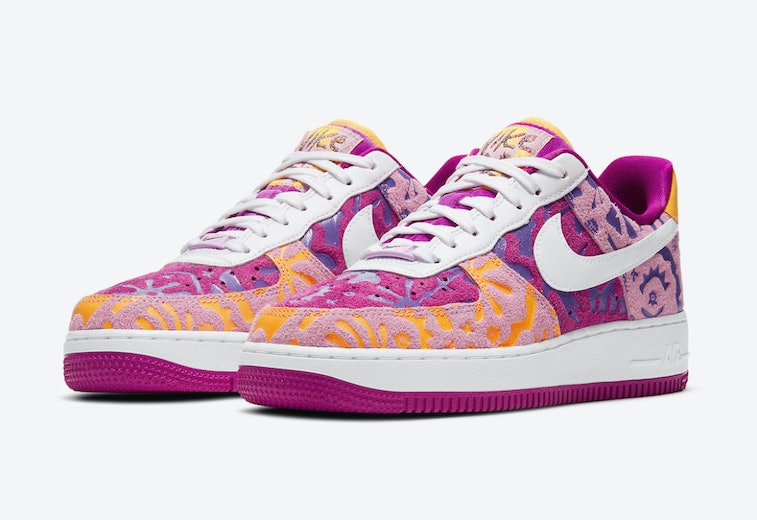 As one of Nike’s most popular silhouettes, the Air Force 1 has been transformed into dozens of styles inspired by both its heritage and the world around it. As the sneaker nears its 40th anniversary, the brand has revealed a new “Red Plum” iteration, decorated with traditional patterns that pay homage to Mexican heritage. The women’s exclusive shoe is potentially part of a larger collection set to commemorate International Women’s Day on March 8.

It’s refreshing to see the Swoosh reach out to the Latin community, especially Mexican women. The brand has an annual tradition of celebrating Día de Muertos via an exuberant pack of sneakers, and collaborated with its first Latino artist, J. Balvin, to create a rainbow, DIY Air Jordan 1 sneaker filled with good vibras. But women, like with most sneaker drops, have been excluded from the hype. Now, Nike’s elaborate new Air Force 1 commemorates Mexican women, a group too often overlooked.

Most of the sneaker is covered in graphics of abstract shapes and glyphs depicting flora and animals to represent the enduring spirit of women in Mexico throughout history. The maize-like panels pop in contrasting colors like purple, yellow, light pink, and fuschia.

Taking inspiration from the intricate motifs, the shoe’s “Nike” branding on the tongue tag has been reimagined in a glittery scrawled font, accompanied by an equally sparkly flower graphic. Contrasting these details are white laces, eyelet panels, a Swoosh, and a midsole, rounded out by a bold plum outsole. And while eye-catching, both the bases and overlays are arguably overshadowed by the graphics imprinted throughout the upper.

Made for Mexico — Given how big a moment this is for Mexican women, we hope Nike is already thinking of ways to ensure these pairs go to their designated audience — similar to what Jordan Brand did when it gave women exclusive access to its Off-White Air Jordan 4 "Sail." The brand hasn’t announced an official release date for its “Red Plum” Air Force 1, but the sneaker is expected to land on Nike’s website soon and retail for $100.

As a Mexican woman myself, I’m eagerly awaiting the drop of these AF1s. By the looks of them, they’re just as loud as my relatives — but that’s a competition even these shoes might lose. Much like family, however, these sneakers are full of meaningful messages, and are sure to be treasured by those that can get their hands on them. Let’s hope some of those people are who the shoe is honoring.