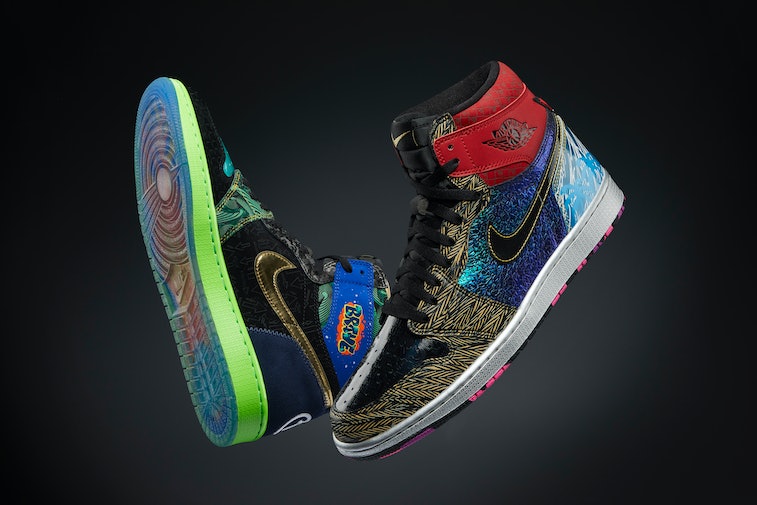 After hitting pause last year, Nike has resumed its annual Doernbecher Freestyle program with a “What The” creation.

For nearly two decades, Nike and the OHSU Doernbecher Children’s Hospital have worked together to run their Doernbecher Freestyle event, a charity-driven project that teams designers at the brand with young patients who are undergoing recovery at the institution. This collaboration has created an annual series of footwear designs, appealing to both the philanthropic community and sneakerheads, resulting in $29 million raised for charity.

Due to the ongoing pandemic, the Doernbecher Freestyle wasn’t able to host patient designers, but Nike and OHSU delivered a fitting tribute to the event by creating a “What The” themed Air Jordan 1 made up of past Doernbecher Freestyle designs. And as this was a year unlike any other, this special shoe isn’t planned for the usual wide release — instead, only 17 pairs have been produced, and will be auctioned off to benefit the hospital.

Mosaic of memories — The extremely limited sneaker utilizes the famed “What The” concept, which features a patchwork-like placement of distinct details on each panel. Boasting designs all the way back from 2007 — the first year the Air Jordan Doernbecher sneaker released — Nike made sure to include every participant, adding detailed photos to break down the shoe’s arrangement.

Sporting a considerable amount of colors, textures, and materials, these Air Jordans have certainly been remixed. The left shoe dons a red, blue, and gold makeup, with metallic hits on its quarter panel, mudguard, and eyestays. On the other foot, the right shoe features a green and blue design, with an ombré toebox, neon green midsole, and velvet accents.

Nike’s release not only breaks down the makeup of each shoe, but also the children’s design inspirations. Personal motifs like angel wings, names, and “Be Brave” graphics are hidden throughout the sneakers to remind wearers of their meaningful origins.

Bidding starts now — Only 17 pairs of the “What The” Doernbecher Air Jordan 1 were created, in honor of the 17th year of the program. The first pair, which came in custom lasered box, was auctioned off during Nike’s Viturally Freestyle event, and at one point was selling for more than $2 million — before the shoe had even been unveiled.

The remaining 16 pairs will be auctioned off on eBay, where they’re expected to go for thousands. All proceeds from the sales will benefit OHSU Doernbecher patients and staff to better help them during the pandemic — and there’s nothing better to lift your spirits than a charitable cop.