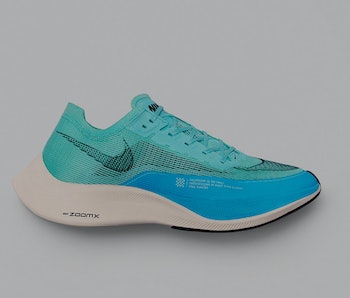 The Nike Next% series of running sneakers have been a far and away success in the marathon circuit and not without controversy. Critics argued the VaporFly Next% was too good after 31 of 36 pole positions in the six major marathons were won by runners wearing the sneakers over the course of two years. World Athletics, the sport's governing body, decided not to ban Nike's leading running shoe — but it did issue stricter guidelines on what could be worn in official competitions in wake of the controversy.

At the 2020 London Marathon, the only event to be held during the pandemic, four of the six pole positions in the men's and women's race were taken by runners wearing the Vaporfly Next% — despite the superior Alphafly Next% being eligible for the first time. And five months later, the Vaporfly Next% has gotten even better.

The ZoomX Vaporfly Next% 2 leaves its innovative sole alone and instead looks to the upper for improvements. The Vaporweave material used for the upper has been replaced by a new mesh material as part of Nike's bid for more comfort and durability. Nike says the mesh will conform better to the foot while helping to keep the foot cool throughout a race.

What's underneath? — In conjunction with the new mesh upper, Nike has added pockets of padding at the top of the tongue to maximize comfort and reduce pressure from the laces. Reinforcement has also been added at the forefoot to improve containment and durability in "high-wear striking areas."

Down low is the same sole system that's been the talk of runners. Full-length ZoomX foam provides a lightweight and responsive ride, while a full-length, articulated carbon fiber plate gives the wearer a propulsive feel and enables a smooth transition between strides. The midsole is cut wide at the forefoot for stability and more propulsiveness, bolstered even further by an 8mm drop from heel to toe.

A soft launch already went down — Nike released an initial version with a minimalist color scheme (seen directly above) inspired by co-founder Bill Bowerman's workshop lore in limited numbers upon the announcement Sunday. That shoe quickly sold out, but Nike will follow up with a wider release in aqua (seen up top) set for March 25.

Expect another quick sellout even with increased supply, as runners tend to gobble up anything from the Next% series. However, the Nike Air Zoom Alphafly Next%, which Eliud Kipchoge wore for his world-first sub-two-hour marathon and in last year's London Marathon, is available right now for $275.

We'll see if the Alphafly, too, gets an update this year — and if Nike continues to dominate with both shoes should the Tokyo Summer Olympics go on as planned. It's also worth noting that the Adizero Adios Pro, Adidas' answer to Nike's Next%, did take second in the London Marathon men's race on the feet on Vincent Kipchumba.