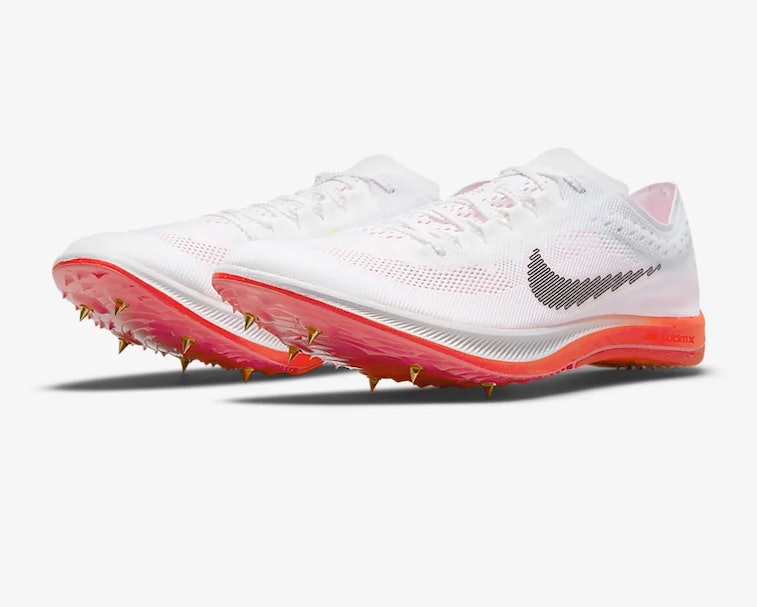 Nike sneakers do help you run faster, according to Karsten Warholm, Olympic 400m hurdle champion. The gold medalist — who works with Puma and the Mercedes F1 team to create his own spikes — complained that his rival, silver medalist Rai Benjamin, was largely aided by his Nike Air Zoom Maxfly sneakers.

Benjamin “had those things in his shoes, which I hate,” allowing him to run “on air,” said Warholm, according to the New York Post. “Those things” are actually a slab of Pebax foam implemented into the sprint spike, a feature found in Nike’s Air Zoom Victory and Maxfly models — both dubbed “super spike” running shoes. Athletes other than Benjamin, like Mo Farah, Letesenbet Giday, Joshua Cheptegei, and Sifan Hassan, have all broken records while wearing Nike Air Zoom Maxfly sneakers.

Sore winner — Warholm, who represents Norway, and Benjamin, who represents the United States, both broke world records during the recent Olympic 400m hurdle race. Benjamin himself declared the event the “best race in Olympic history,” while gold-winning Warholm — who celebrated his 45.94 win with a celebratory scream before ripping his uniform in half and dropping to his knees — moved his focus to Benjamin’s Nike kicks.

“I don’t see why you should put anything beneath a sprinting shoe,” Warholm said, referencing the Nike sneakers’ foam padding. “In middle distance I can understand it because of the cushioning. If you want cushioning, you can put a mattress there. But if you put a trampoline I think it’s bullshit, and I think it takes credibility away from our sport.”

Warholm’s own spikes feature an upper carbon plate in the sole and weigh only 135 grams — yet they’re not the same as the “super spike,” according to the athlete. He noted that while technology allows for better sprinting sneakers, he wants to “keep it down to a level where [runners] can compare results because that is important,” implying the Nike Air Zoom Maxfly spikes had made Benjamin’s results incomparable.

Benjamin gave credit to the conditions of the Olympic track, not his Nike sneakers, for his second-place finish. He added, however, that he “could wear different shoes and still run fast.” Still, in a case of all press is good press — something that doesn’t always ring true for Nike — plenty of the brand’s Air Zoom Maxfly spikes have sold out.

“Technology doping” — And while Warholm’s qualms seem obnoxious — he did win gold, after all — Nike sneakers have caused controversy at the Olympics before. The brand’s Vaporfly shoe, which research suggests gives runners more efficiency because of its energy-saving foam-and-carbon sole structure, was called “technology doping” by rival shoemakers and the running community.

Nike openly promotes the Vaporfly as “the fastest shoe we've ever made,” and results only bolster the claim: In 2019, Vaporfly sneakers were worn by 31 of the 36 top finishers at the six biggest marathons in the world. Said to be causing an unfair advantage, the shoes were investigated by World Athletics, which acts as track and field’s governing body. And despite calls to ban the shoe from competition, World Athletics green-lighted Nike’s Vaporfly to appear in future races, including the Olympics.

After the controversy, however, World Athletics announced it would be undertaking further research to “establish the true impact” of new technology that could provide a performance advantage, noting that “there is sufficient evidence to raise concerns that the integrity of the sport might be threatened by the recent developments in shoe technology.” Soon, Nike’s Air Zoom Maxfly could become further evidence of such claims.