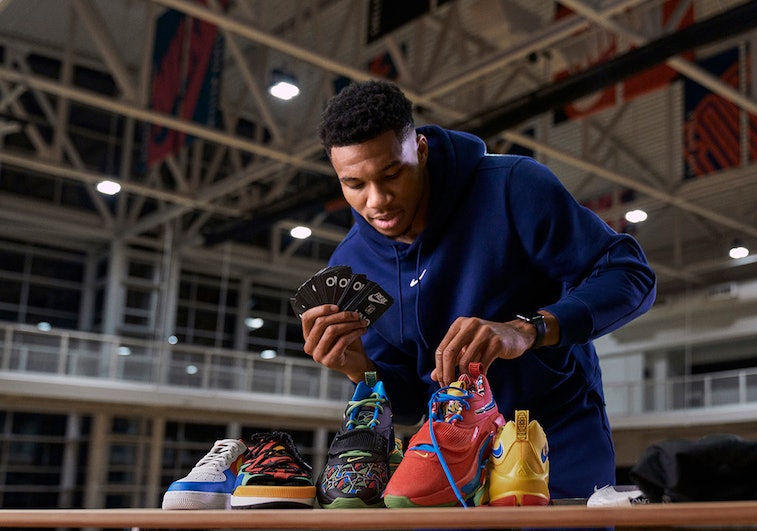 When images first surfaced of an Uno x Nike Air Force 1, we were left scratching our heads as to why such a sneaker exists. Sure, it’s attractive — but the connection between brands wasn’t as clear as it now under official unveiling.

Giannis Antetokounmpo and his beaming smile are fronting the collaboration celebrating Uno’s 50th anniversary with a total of seven sneakers. Among them will be five different variants of the Zoom Freak 3, representing all four colors of cards from the game as well an additional version in black.

“I want every product to be genuine and authentic, and playing Uno with my brothers is a big part of our lives,” Antetokounmpo said in a release. “The Nike team has done a great job bringing my ideas to life, and I think they’ve created something for every Nike, Uno, and basketball fan in this collection.”

Take 7 — The Uno Zoom Freak 3 will release in red, blue, yellow, and green variants — all of which feature accents making use of the rest of the colors from the deck. The colorful assortment of sneakers is joined by a “Wild Card” version coming in black with an all-over print of the card it’s inspired by.

Moving away from Antetokounmpo’s signature line will be the Air Force 1 previously revealed and the Offline Mule 2.0 — both of which continue with the “Wild Card” theme. A small run of apparel and accessories are also part of the collection, including a Swoosh-branded Uno pack with Supreme levels of novelty. The game includes a new “Turnover” card which allows players to steal an extra card from discard pile.

For now, only the Uno deck has a release date confirmed. The game will go on sale through Mattel’s website and the NTWRK app on November 11, with the wearable goods to follow some time in the coming months. In the mean time, I’ll be picturing the Greek Freak and his family of giants hunched around a small table playing Uno.