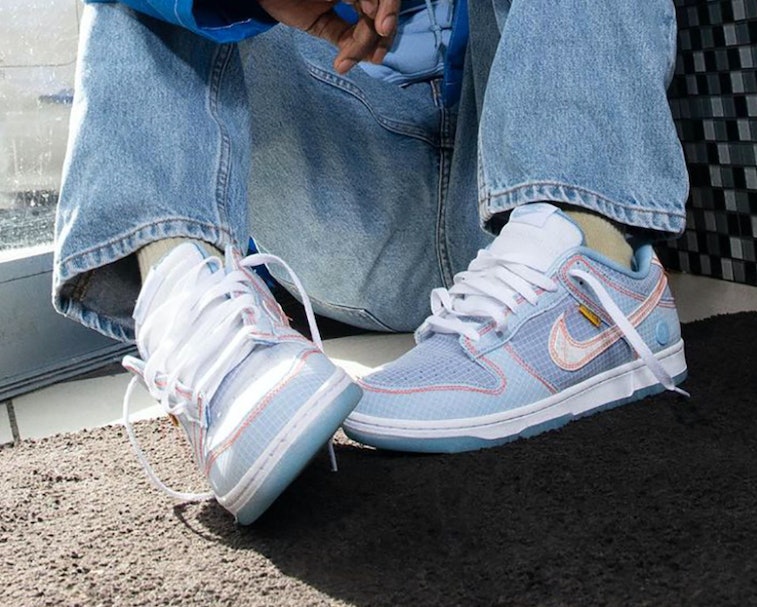 Streetwear boutique Union is is continuing to put its spin on the Nike Dunk Low with its “Passport Pack” of travel-inspired sneakers. After releasing a “Pistachio” version of the Dunk in February, Union has readied “Argon” and “Court Purple” iterations to close out March. Just like the previous release, the two new variants feature ripstop uppers, exposed stitching, and Union branding.

The “Passport Pack” pays homage to exclusive Japanese Dunks that, prior to the booming resale market, were only available within the country. Back in the ‘90s and early ‘00s, avid sneaker collectors and shops (including Union) would have to travel all the way to Japan in order to bring the rare Dunks back home — hence the “passport” theme of the upcoming sneakers.

World tour — Each Dunk boasts a ripstop upper which can be torn away to reveal the pigmented leather underneath. The dusty blue “Argon” pair, accented by red stitching, riffs off a pair of rare sneakers found by Union owner Chris Gibbs in Japan. Per its namesake, the “Court Purple” iteration takes on a purple palette with yellow stitching, a color scheme reminiscent of the Lakers but actually derived from the classic Japanese Dunk “City Pack.” Gridded lines on the semi-transparent upper further nod to the travel theme of the sneakers and add a color-changing effect to the Swoosh depending on how the light hits it.

Union’s Frontman logo appears on a small black patch towards the heel, while a yellow “UN/LA” tag hangs off the stitching just above the Swoosh. An icy blue outsole finishes off the “Argon” Dunk as a more opaque purple outsole wraps up the “Court Purple” pair. Both Dunks come packaged in exclusive boxes sporting travel stamps and passport-esque graphics.

Book your trip — Like the previous “Pistachio” sneaker, both forthcoming Dunks will be released exclusively on Union’s website on March 31. There’s a good chance the boutique will host a raffle ahead of the drop, so you’ll want to keep your eyes peeled on Union’s socials for any details.

Demand for the “Argon” and “Court Purple” Dunks is beginning to peak, and like the Dunks that came before the “Passport Pack,” people may be willing to go to great lengths — and costs — to acquire the sneakers. Pairs of the “Pistachio” kicks, which retailed for $150, are re-selling for up to $1,000 while the “Argon” and “Court Purple” are prematurely listed for $1,881 and $1,388, respectively. Getting the sneakers amid hype, resellers, and bots will be a trip within itself.