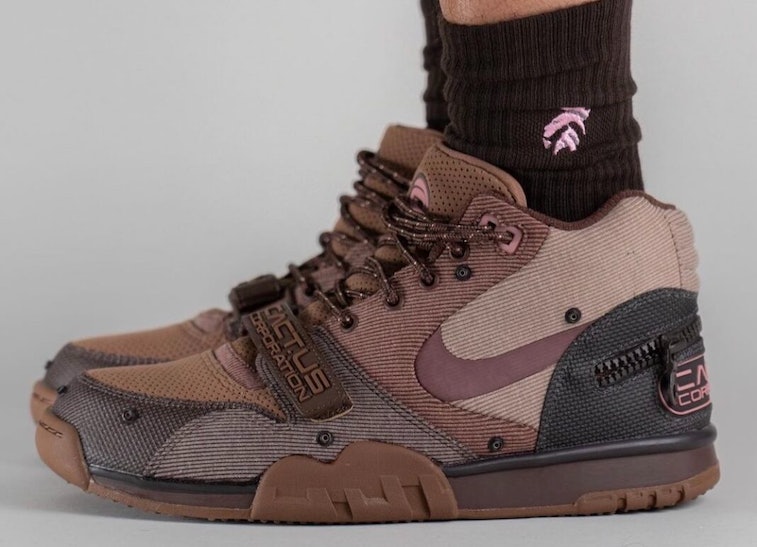 Travis Scott’s Nike collaborations could return soon. On-foot photos of the rapper’s brown Air Trainer 1 Mid sneaker — originally slated to release at the end of 2021 — have surfaced, suggesting a release may be around the corner. After Astroworld, however, it’s unclear whether the shoes will see the same heightened demand as before.

Hit pause — The Air Trainers, alongside 10 other Cactus Jack sneakers, were postponed in November after Scott’s Astroworld music festival left 10 people dead and over 300 injured. Since then, the rapper has ceased his partnerships with multiple brands — including Fortnite, Dior, and his own spiked seltzer brand, Cacti — and has maintained that Live Nation, the show promoter behind Astroworld, was responsible for the tragedy. Regardless, Scott’s image (and revenue) has been severely impacted since the music festival.

In the three months since Astroworld, it’s been unclear whether the rapper’s fanbase is as strong as it once was. People have supported Scott through similar scenarios before — defending his history of encouraging raging crowds — but after the events at his music festival, some fans went as far as to break copies of the rapper’s records, burn Cactus Jack merchandise, and block Travis on music streaming platforms. Thousands of Astroworld attendees are still seeking legal compensation for injuries as Congress itself has launched a bipartisan investigation into the tragedy. That said, some people may be willing to look the other way in the name of exclusivity and hype — just look at the comments on any of Kanye West’s unabashed Instagram posts.

Training for a comeback — Scott’s Air Trainers first surfaced last August, when paparazzi shots showed the rapper wearing a pair around New York City. The retro kicks channel Scott’s love of brown, featuring various shades of tan and chestnut. A translucent brown outsole and dark brown overlays stand out amongst a tan corduroy upper with light brown accents, while Scott’s reverse Swoosh matches pink eyelets and back heel branding, which reads “CACT.US CORPORATION.” The same branding appears on a velcro strap at the bottom of the lace unit.

Known as the “Swiss Army Knife of performance shoes,” the Air Trainer 1 Mid ruled ‘90s sports and, later, the ‘00s, as Nike issued a rebirth series. Scott has kept many of the sneaker’s functional details, including protective removable sheaths and zippered pockets at the heel.

Nike has yet to debut official imagery of Scott’s Air Trainer 1 Mid, meaning the brand may continue to delay the rapper’s sneakers. In December, when Nike first announced the postponement, it was supposed to release two Air Max 1 x Cactus Jack shoes — neither of which has surfaced since. It’s possible that the delays have altered Nike’s drop schedule, especially as a spring release is rumored for the Air Trainer 1 Mid sneaker. Still, seeing Scott’s shoes on SNKRS seems to be an occurrence as likely as spotting the rapper nowadays.