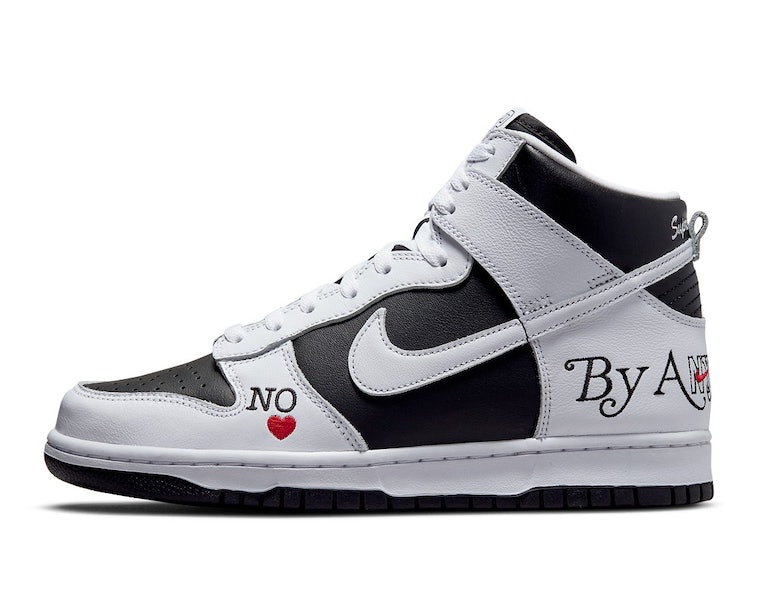 When it comes to footwear, there’s no bigger event for Supreme than a collaborative pair of Nike SB Dunks. The New York City streetwear brand’s long-running partnership with Nike’s skateboarding line has birthed some of the most heralded Dunks in existence, with several pairs now worth thousands of dollars. More recent releases haven’t been quite as fussed over, but a leaked pair of SB Dunk Highs is all but sure to raise some noise.

As in-house images from Nike have revealed, Supreme will use its latest SB release to play with NYC iconography. The text-heavy high-tops utilizes The New Yorker’s iconic font to spell out “By Any Means Necessary” and interrupt the phrase with an “NY” Nike logo done up in varsity letters.

While those words wrap the sneaker’s heels just above the midsole, “Supreme Team” is also spelled out in cursive just above the heel pull. Meanwhile a “No <3” hit on the tip flip’s Milton Glazer’s famous “I <3 NY" graphic, and more varsity font is used for the tongue label with “Sup” covered by the Swoosh.

A whole lot going on — If someone in the design room for Supreme asked how much text should be used for its SB Dunk High, the answer must have been a firm “yes.” The sneaker is a crowded affair likely to split sneakerheads between viewing it as corny or a perfect encapsulation of Supreme’s attitude.

A sellout is all but guaranteed because Supreme is too big to fail at this point, but whether or not the new Dunk touches the level of acclaim as earlier releases remains to be seen. Supreme’s “Black Cement” and “White Cement” SB Dunk Lows from 2002 brought the sneaker’s elephant print to the foreground for one of the most coveted Dunks in existence, while the star-covered Dunk Highs released a year later are also highly prized.

Supreme or Nike has yet to officially confirm their latest SB collab, but expect the sneaker to release at some point during the FW21 season and bring at least another color scheme. Until then, don’t be surprised if the kicks kick up routine arguments over their merit.