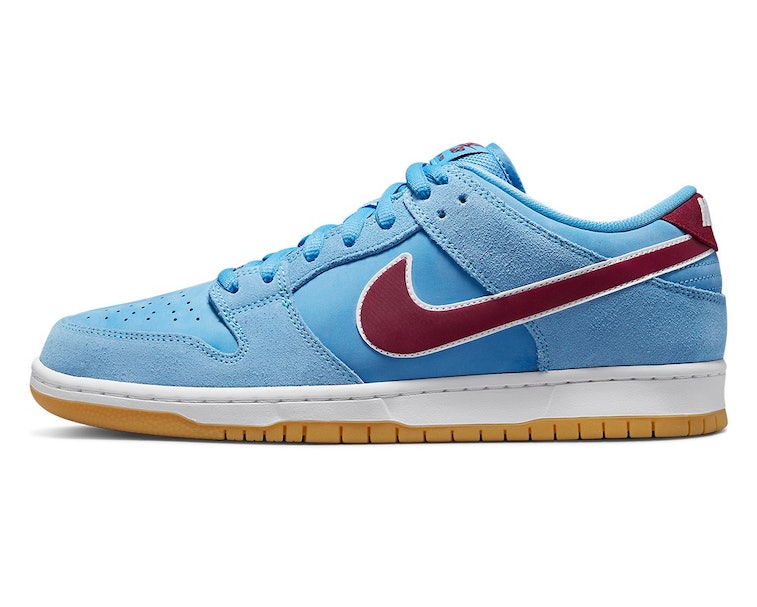 Philadelphia — the land of unique welcomes for hitchhiking robots, pronouncing water as “wooder,” and celebrating victory by eating horse poop — is being treated by Nike SB to a Dunk to call its own.

Images of a Philly-themed SB Dunk Low have surfaced featuring the beloved retro colors of the Philadelphia Phillies baseball team. Powder blue makes up the majority of the upper save for the white-lined Swoosh and mustache, both of which appear in maroon. Down low is a white midsole and always-welcomed gum outsole, but the most overt Philly detailing is saved for the interior of the sneaker.

Mismatched undersides of the tongue feature stitched graphics of a Philly cheesesteak and the Liberty Bell. These are the sort of hidden details made only for the joy of the wearer, but even if you’re not from Philadelphia or a fan of its baseball team, you may very well still be attracted to the popping exterior.

Make it SB, please — Nike makes two versions of the Dunk Low, the first of which actually came under the SB skateboarding line. That sneaker features bulkier proportions that fell in line with skating silhouettes of the early millennium, but a slimmer version attributed to regular ole Nike was later introduced at the behest of pro skater Eric Koston.

Of the two variants, SB Dunks are the more widely heralded and less easy to come by. In the earlier days of skate culture, SB Dunks is where Nike was willing to experiment most and begin working with collaborators. Oftentimes, although less so today, SB Dunks are only available through local skate shops — making them harder to acquire while encouraging support of independent businesses.

Nike has yet to confirm official release details for its Philly-themed SB Dunk, but we can likely expect it to come in the coming months as a possible skate shop-exclusive. It’d be especially cool if the sneaker were only released in Philadelphia, but sneakerheads elsewhere probably won’t be left out in the cold.