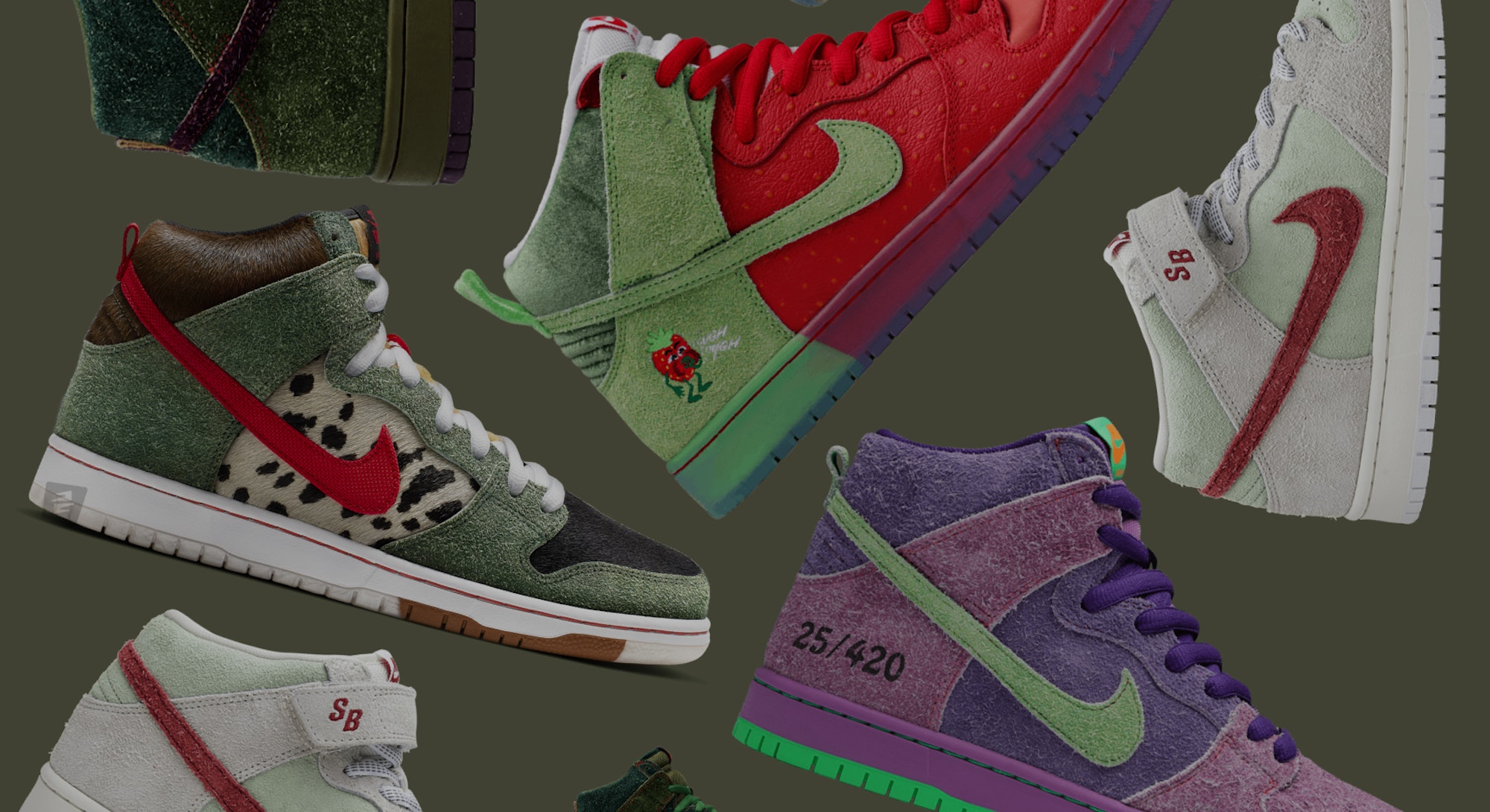 Since 2004, Nike SB has released a Dunk to celebrate 4/20 — but what’s now known as an annual tradition actually started off as an experiment.

In the early 2000s, cannabis didn’t have the same reputation it has now; you certainly couldn’t find it tidily packaged in a dispensary or legalized in New York City. Producing something that celebrated the recreational drug — let alone something made by a company like Nike — was unheard of.

The Swoosh was struggling at the time though, as a latecomer to the skateboarding market. In a bid to make up lost time, the brand resuscitated the 1985 Dunk silhouette, an ’80s sneaker once associated with college basketball, and remarketed it to cater to skaters. But as the “Be True to Your School” pack made Dunks desirable to college students, Nike had to figure out how to appeal to its new demographic. The college basketball Dunk had been known for colors associated with specific teams, like UNLV’s red and silver, or Syracuse’s orange and white. What was a theme skaters would find tempting?

Collaborations with Supreme and Stüssy helped boost the SB label, but with a focus on the chill vibe of the skatepark, a thematic answer became loud (and clear). Cannabis and sneakers go relatively hand in hand — no one’s going to light up in a pair of boots or oxfords. And by combining two cultural outliers (skateboarders and weed), Nike created a sense of community, and better yet, a jumping point for its newly-launched SB line.

Combining skateboarding and weed was a “natural fit,” Nick Engvall, founder of Sneaker History told Input. While he doesn’t credit the 4/20 Dunks as to why Nike SB succeeded, Engvall said the thematic line certainly “sped up the process.”

“By creating [the 4/20] sneakers, Nike almost stepped away from being a massive corporation, instead aligning with the skate shops skateboarders were actually buying the shoes from,” he said. With Nike going out of its way to reference weed — which was considered taboo at one point, particularly in the corporate world — skaters felt like they were finally being seen and understood by the company.

Nike SB’s first explicit connection came packaged in a low-top Dunk made of hemp, decorated with a maroon Swoosh. With the sneaker releasing on April 16, the reference wasn’t totally clear — but another hemp Dunk with a blue Swoosh and soles, launched on 4/20, made the subtle link much more obvious. Both models, along with a later green pair, are now considered a ground zero moment, and thanks to their scarcity, boast high resale value. The blue hemp pair is listed for $2,500 on StockX, while the green pair — completing the trio, and more notably nodding to the reefer reference — is listed for $28,000.

“By creating [the 4/20] sneakers, Nike almost stepped away from being a massive corporation”

High resale prices are typical for Nike SB’s 4/20 sneakers, as pairs tend to be extremely limited and rarely does their stock match the high demand for them. And as a cheeky tribute to the holiday, the brand makes even more sought after by often only releasing 420 pairs of a particular weed-friendly SB Dunk model. Naturally, scoring a themed pair has become much harder, and yet more rewarding, than your typical Dunk.

Part of this is thanks to the sneakers’ design, too, not just the shoes’ exclusivity. Years after debuting its first 4/20 Dunks, as weed became more conventional, Nike SB rolled out more pronounced designs, and gave them names like “White Widow” and “Strawberry Cough.” The influence of Todd Bratrub, illustrator and owner of Send Help Skateboards, especially accelerated Nike SB’s 4/20 Dunks. A certain model — 2010’s Nike SB “Skunk” Dunk High — widely became considered the best, and most coveted, 4/20 sneaker.

The “Skunk” Dunk featured a hairy mixed green upper, imitating the texture and look of hemp flower. A dark purple Swoosh and outsole added dimension to the sneaker, while a cheeky skunk graphic on the insole further nodded to strains like Purple Haze and Purple Skunk. Perhaps the best part of the sneaker, though, was a Nike-first: a secret stash pocket that could be used for carrying around special goods. The sneaker’s exclusive run and $20,000 resale price tag have only cemented its place in Dunk history.

Nike SB eventually doubled down on that formula, and in 2020, released a “Purple Skunk” Dunk to celebrate the stoner holiday. Also known as the “Reverse Skunk” Dunk, this sneaker came dressed in a hairy mixed purple upper, complete with a bright green Swoosh and outsole. And with the Dunk silhouette gaining traction — and non-skaters tuning in to Nike SB’s creative designs — the remixed shoe became even more popular than its original. Its limited run of 420 pairs also ran up demand and thus resale value.

“Nike usually has a factory minimum, I think it’s around 1,000 pairs,” Dennis Burdick of Familia Skateshop told Input. “But for the [Purple Skunk] drop, we were able to hold it true to only 420 pairs.” Nike SB, with the help of designer Bratrub, worked with the Minneapolis-based skate shop to release the follow-up to the original Skunk Dunk. “I’m pretty sure Nike had approached Todd about making a 10-year anniversary [Dunk], and because he’s so tied to our shop, we had the platform to launch it,” said Burdick. But it wasn’t until a few weeks prior to launch that Burdick knew what the now-iconic sneaker looked like. “I blew it off at first because I thought the follow-up was just going to be a low-top version of the original,” he said. “And you know how a sequel to a movie is either really bad, or really good?”

The inverted Skunk Dunk was an instant hit, delighting not just Burdick but sneakerheads across the globe. But, as COVID-19 began to spread in 2020, Familia was forced to change its initial drop plan for the sneaker. “[Familia] wanted to tape the store up like we were closed, and just put an image of the original Skunk Dunk in the window,” said Burdick. “Then we just wanted to post an Instagram photo of Todd holding the Purple Skunk in front of our shoe wall, list our hours, and just let people panic.” But with COVID preventing an in-person launch — and a sneaker leak a week before official release — the skate shop ended up hosting a 4:20 minute raffle for the limited shoes.

“If everyone could get it, no one would want it.”

Out of the total 420 pairs, only 220 came with limited-edition boxes, thanks to Nike’s selective seedings. Familia received the exclusive 220 pairs for its consumers, while Nike took the other 200 — sans special box — for its friends and family handouts, said Burdick. “Only the ones from Familia have a special box sticker, print, and keychain,” he added, noting the exclusivity of the shoe made it that much more desirable in today’s sneaker climate. “If everyone could get it, no one would want it.”

While 4/20 sneaker releases started as a sly nod to stoners, more recent designs prove companies are getting bolder alongside loosening recreational cannabis laws and the cultural acceptance — if not celebration — of the drug. Now, as Nike’s Dunk hype reaches its peak, 4/20 sneakers are becoming more of a tradition in the space, and other brands including Adidas, Vans, and even Asics have joined in on the fun and released their own shoes dedicated to the holiday.

There’s no denying Nike SB’s influence on the sneaker industry. But, at the same time, it’s important to note that brands have seen the success of the 4/20 Dunks and wish to reap the same profits as the Swoosh. This strategy could turn stoner sneakers into less of a celebration and more of a fetishization, with companies seeking to monetize the “edginess” of drug-themed sneakers.

And while we can still point the finger at Nike — a huge corporation obviously focusing on profits — Nike SB was the initial 4/20 plug. In 2004, when the brand first launched its hemp sneakers, it might’ve been seeking profits, but more so, Nike SB sought to cater to a then-niche community. As Engvall said, Nike made its target demographic, skaters, feel seen and understood, even if that only happened after a botched first attempt at trying to relate to that community.

Now that the Dunk silhouette has gained the attention of mainstream crowds, not just true sneakerheads, Engvall noted there are “two sides” of the market. On one foot, there’s people who “genuinely like sneakers and probably smoke weed,” without thinking of the hype or value surrounding the 4/20 shoe, Engvall said. The other half may just be following in the footsteps of hypebeasts like Travis Scott, he added.

Moving forward, as Nike looks to keep its annual SB tradition burning, the challenge for the brand will be to ensure it doesn’t kill the beauty of the Dunk by over-saturating the market and simply catering to hypebeasts. The grass on its end must stay green.