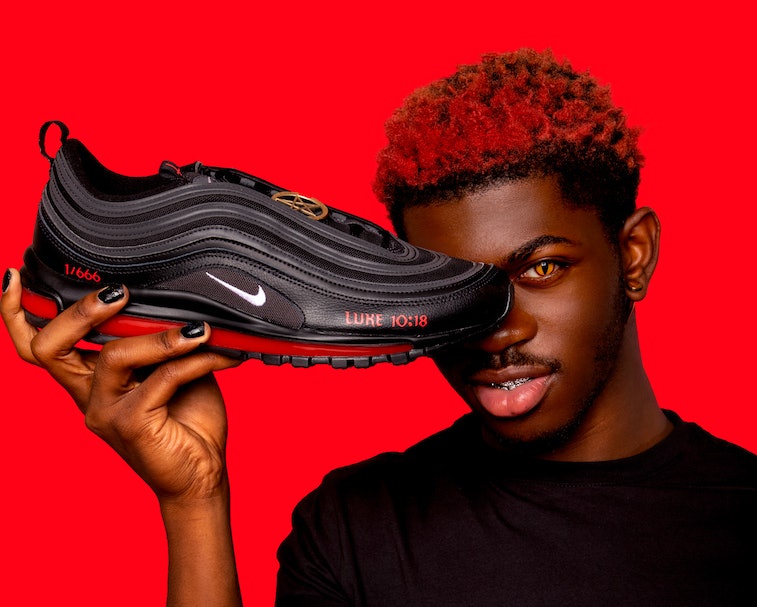 Two years ago, MSCHF created a media frenzy with the debut of its “Jesus Shoe,” a customized Nike Air Max 97 sneaker filled with holy water from the River Jordan. Based out of Brooklyn, the artsy brand is known for its outside-the-box projects, like making $76,000 Birkenstock-esque sandals made from real Birkin bag materials. That’s just the kind of thing it does. Now, MSCHF has teamed up with Lil Nas X to craft something truly sinister, filled with genuine human blood: the “Satan Shoe,” another custom Air Max 97 dressed in black with a bronze Pentagram charm, which caused controversy before it was even officially revealed.

Only 666 pairs have been made (obviously), and each sneaker boasts its individual number on the side of the shoe in red. Like the Jesus Shoe, the Satan Shoe sports a bible quote on its mudguard, but this one honors Lucifer falling from heaven. The sneaker has then been completed with 60cc of red ink and one drop of human blood — which is real, Daniel Greenberg, Director of Strategy and one of the founding members at MSCHF, told Input. Some of the bodily fluids are even his own.

Giving a new meaning to “Bloody hell” — “At MSCHF, we like to say we sacrificed for the sneaker,” Greenberg said. “The whole team gave blood for the shoes.” The amount in each Satan Shoe is too small for him to be worried about anyone tampering with it, though, he added. Plus, given the price tag, we’re not sure anyone would want to rip the shoes apart for a stranger’s blood. As a nod to the biblical quote on the side of the sneaker — Luke 10:18 — a pair of the sinister Air Max 97s will run you $1,018. You’d practically have to be in Lil Nas X’s tax bracket (or a huge fan of Satan) to spend that much on a sneaker.

These demonic shoes are truly a novelty, though, and you won’t find a pair like them at Nike. In fact, the brand wasn’t involved with the Air Max 97 at all — instead, Greenberg said, MSCHF used the shoe “as a material,” or as a canvas, for the Satanic creation.

“Nike did not design or release these shoes and we do not endorse them.”

But Nike wants nothing to do with the sinister sneakers. “We do not have a relationship with Lil Nas X or MSCHF,” a Nike spokesperson said in a statement sent to Input. “Nike did not design or release these shoes and we do not endorse them.” The sportwear brand is also considering taking legal action against MSCHF, as conservative people who aren’t aware that Nike did not actually design or make the shoe are calling for the brand to be boycotted. Such controversy, though, could make the Satan Shoes even more valuable — there’s nothing like owning a sneaker seen as contraband.

Really, the illicitness is all part of MSCHF’s marketing plan. Like the Jesus Shoes, or the brand’s “Birkinstock” sandals, resale value spikes once consumers realize pieces are limited, exclusive, and “banned.” MSCHF products have become extremely coveted as such, and consistently borrow and alter other label’s products, as hinted by MSCHF’s name. “[MSCHF] has gotten plenty of cease and desist letters, but never been sued,” Greenberg said. “We don’t really care if we’re loved or hated.”

From horses to hell — The message is similar to the mindset of MSCHF’s latest collaborator, Lil Nas X. As an openly gay, Black artist, he’s been subject to a lot of internet hate, which he humorously dismantles better than most celebrities. And when it comes to the Satan Shoe, Lil Nas X had his own demonic idea for the sneaker, involving a music video where he himself plays Lucifer.

“We’ve known [Lil Nas X] and his team for a while,” said Greenberg. “And his upcoming music video fit the satanic vibes of the shoe.” In Lil Nas X’s music video, for his new song “MONTERO (Call Me By Your Name),” the artist is executed for being gay and pole dances down to hell. There, he seduces Satan (wearing the Satan Shoes) with a lap dance, before killing the devil and becoming Satan himself.

Released just last Friday, March 26, the video has gone viral, amassing over 23 million views. Lil Nas X — whose real name is Montero Lamar Hill — has received praise for being “unapologetically queer” in the clip, while conservatives have deemed it “blasphemous” amid the video’s provocative religious context.

The singer responded to the backlash with a series of tweets, claiming it was not his job to dictate what his fans consume. “I am not gonna spend my entire career trying to cater to your children. That is your job,” he wrote in a tweet. A follow-up response then read: “There is a mass shooting every week that our government does nothing to stop. Me sliding down a CGI pole isn’t what’s destroying society.” He does have a point there.

Lil Nas X also noted the irony of conservative critique. “Y’all love saying [gay people] go to hell but get upset when I actually go there lmao,” he cheekily tweeted. The 21-year-old singer then used his platform to promote his MSCHF collaboration, noting in a tweet that “the shoes hard,” and those who didn’t agree were liars. Lying is a sin, you know.

Further trolling conservatives, Lil Nas X shared a YouTube video titled “Lil Nas X Apologizes for Satan Shoe.” If you actually watch the clip, though, you’ll find the artist cut back to a part in his music video where he says “fuck it” and lap dances on the devil. Lil Nas X’s expert trolling only adds to the value of the shoe as it riles up haters.

Satan’s got style — If you do end up spending the $1,018 on MSCHF’s bloody Air Max 97, know you’ll be getting what you paid for. The all-black silhouette features branding from MSCHF, Lil Nas X, and even Satan himself (peep the upside-down cross on the tongue tab). Each pair also comes in a devilish yet detailed box, featuring graphics of Satan overlooking souls perishing in hell, as well as an expanded version of the shoe’s bible quote.

Already viral before their release, all 666 pairs of the Satan Shoes sold out in less than a minute on MSCHF’s app. The costly sneakers have already been seen on Lil Nas X and Miley Cyrus, and if you weren’t able to buy, resale prices might damn you more than the actual shoes. Your chances of copping a pair are practically as slim as hell freezing over.