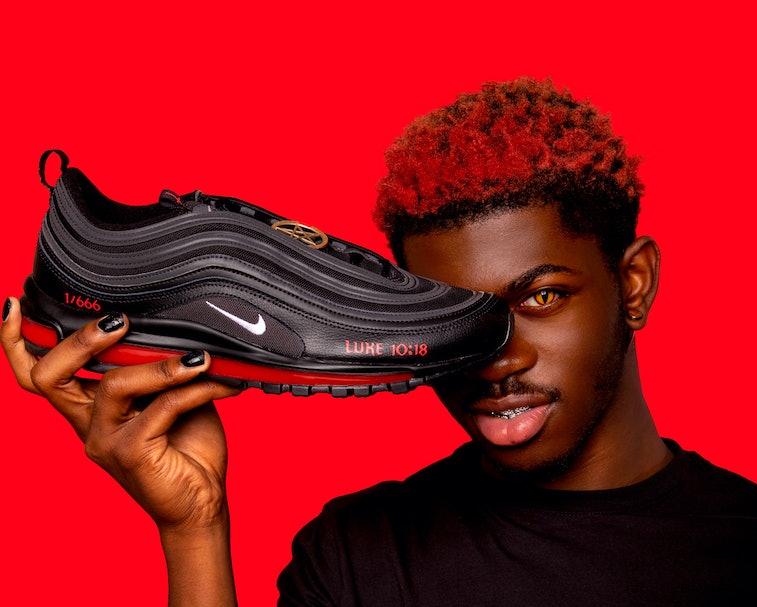 Two years ago, MSCHF created a media frenzy with the debut of its “Jesus Shoes,” a customized Nike Air Max 97 sneaker filled with holy water from the Jordan River. The pair, not endorsed or made by Nike, was worn by A-list celebrities like Drake — a huge Nike fan who now has his own sub-brand with the Swoosh. As the most Googled shoe of 2019, the Jesus Shoes arguably brought Nike good press, or at least an enormous amount of attention, despite zero involvement from the company.

And while not everyone believes in Jesus, the man doesn’t appear to have many haters. Neither Nike — nor the Vatican, for that matter — took legal action against MSCHF, or publicly disavowed the shoes. “That would’ve been rad,” Kevin Wiesner, then the creative director at the artistic brand MSCHF, told The New York Times in a 2019 interview. Well, if what MSCHF wanted was Nike’s attention, its new, satanic-themed creation has definitely done the trick. A follow-up to its Jesus Shoes, the “Satan Shoes” are another custom Nike Air Max 97, though this one is a collaboration with rapper Lil Nas X and features genuine human blood and details like an upside-down cross and a Pentagram charm.

For a sneaker with a Nike logo, MSCHF’s design choices are quite peculiar, and it didn’t take long for the Satan Shoes to cause controversy before they even launched — as religious and conservative consumers were quick to call for a Nike boycott, being completely unaware that it wasn’t an official pair from the brand. That backlash taking place across Twitter, Instagram, and TikTok was enough for Nike to come out and promptly distance itself from the sneakers. Then it sued MSCHF for “trademark infringement and dilution, false designation of origin, and unfair competition.”

So, why file a lawsuit over the Satan Shoes but not the Jesus Shoes? The answer to that may come down to a simple element: consumer confusion caused by a negative perception, which Nike didn’t have to deal with MSCHF’s Jesus Shoes. MSCHF did not answer Input’s request for comment in time for publishing this story.

Aside from acting as a follow-up to MSCHF’s Jesus Shoes, the Satan Shoes were released to time up with a music video by Lil Nas X, which boasts an equally sinister theme. In the video, for the artist’s new song “Montero (Call Me By Your Name),” Lil Nas X can be seen pole dancing down to hell, seducing Satan (wearing the Satan Shoes) with a lap dance, and killing the devil to become Satan himself. Amassing over 55 million views since its release less than a week ago on March 26, the clip has received praise for being “unapologetically queer,” while conservatives have deemed it “blasphemous” due to the video’s provocative religious context. Lil Nas X has also been criticized for releasing the video on the “eve” of Holy Week, leading up to Easter.

While the Jesus Shoes certainly went viral, they didn’t have the same social impact as Lil Nas X’s collaborative Satan Shoe. Obvious elements, like the bad press Satan can bring a company, make the shoe a target for trouble, and Lil Nas X’s music video — which some religious viewers accused of promoting “sins” like being gay — added fuel to the fire. Unlike the Jesus Shoe, which asked consumers what a collaboration with Christ would look like, the Satan Shoe includes layers other than religion.

In 2019, when the heavenly shoes dropped, Nike naively ignored them, despite some consumers expressing anger towards the image of Christ being used on a sneaker. But the past number of objections was nowhere near the thousands of current complaints, and had Satanists spoken out against the Jesus Shoe — much like Christians are now with the Satan Shoe — Nike would have ignored them, seeing the group as a minority.

Now that the sinister sneakers cater to frowned-upon cultural phenomenons like Satanism and Satanic rituals, however, Nike doesn’t seem to want to anger the group of religious people it sees as a majority. Whether or not people agree that the shoes (and Lil Nas X’s music video) were an art project or freedom of speech, Nike doesn’t want to be associated with Satan in any way. And with the company’s profits in danger — a liability that didn’t occur with the Jesus Shoes — the brand had to take action.

This year hasn’t exactly been kind to Nike’s reputation among consumers. Between the brand’s reselling scandal and its extremely limited sneaker drops, Nike has repeatedly angered customers this year, and was walking already a fine line prior to the Satan Shoe release. Simply put, the company can’t afford any more bad press, and given the overwhelming response to the sinister sneakers, Nike had to take action for its own good.

MSCHF has escaped past legal troubles by citing the First Sale Doctrine, which protects reselling goods that are protected by intellectual property laws — similar to selling branded clothes on reselling apps — and by claiming the shoes are protected as a parody. Daniel Greenberg, Director of Strategy and one of the founding members at MSCHF, told Input in an earlier interview that MSCHF used Nike’s Air Max 97 “as a material,” or as a canvas, for its Satanic creation. Whether these legal defenses will work for the brand — or deem it defunct — is not yet known.

This year hasn’t exactly been kind to Nike’s reputation among consumers.

Nike is notorious for defending its sneaker designs, as evident by its lawsuit against independent designer Warren Lotas. When Lotas released his Pigeon Dunk sneakers — bearing a slightly altered Swoosh symbol — the sportswear brand denied him from distributing the shoes, claiming they were “illegal fakes.” Nike even went as far as to additionally sue the manufacturer that worked with Lotas, citing that the altered sneakers could ruin the Swoosh’s reputation.

As such, Nike’s current lawsuit could lead to complications affecting businesses other than MSCHF, and like Lotas’ case, could create a precedent for future lawsuits. With reselling at an all-time high, creatives and hypebeasts alike have crafted custom sneakers, upcycled old brand designs, and reimagined branded material into new creations — all of which consumers go crazy for, and makers can make a profit off of. But as brands, like Nike, seek to make as much money as they can — and limit the income others might be making off the company’s hype — the result of this lawsuit could change the reselling and customization market for good.

Nike stated in its legal complaint to MSCHF that it did not want the brand to distribute the Satan Shoes, and all pairs should be sent to Nike for destruction. Regardless, according to multiple consumers, who received shipment confirmations, MSCHF has started dispatching the lawsuit-inducing footwear. The brand has also announced it is giving away the last, 666th pair of its Satan Shoes on Twitter.

Now, The Fashion Law reports legal counsel for MSCHF contends that the brand “already shipped 665 of its 666 infringing shoes,” and that, in reaction to the alleged distribution, Nike is seeking a temporary restraining order against MSCHF to recall the sneakers and stop the brand from further damaging Nike’s image — as MSCHF did when promoting a “Legal Fees” tee highlighting the first page of Nike’s legal complaint against the brand.

While MSCHF’s counsel says the brand “has no intention of issuing additional Satan Shoes,” Nike certainly isn’t happy with the label, and also argues MSCHF still has one pair remaining, pointing to the brand’s Twitter giveaway.

In a statement sent to Input, MSCHF claims it was “honestly surprised” by the legal action Nike has taken, and that it “looks forward to working with Nike and the court to resolve this case in the most expeditious manner.” As a result of the lawsuit, MSCHF has also canceled its Twitter giveaway for the 666th pair of Satan Shoes.

But despite MSCHF’s past escapes from legal trouble so far, The Fashion Law says this lawsuit could be the brand’s demise. Nike has rejected MSCHF’s request that the court “give its mass-produced shoes the same protection afforded expressive works, such as a satirical magazine,” TFL reports, contradicting MSCHF’s previous defenses of parody.

While the First Amendment protects free speech, Nike argues it does not entitle MSCHF to sell footwear emblazoned with its Swoosh logo. The company agrees that MSCHF has the right to critique social norms, as well as religious norms — but says the Satan Shoe lacks “artistic relevance to [Nike’s] trademark,” which only confuses consumers and adds no further explanation as to why the Swoosh appears on them.

According to The Fashion Law, Nike also claims that “MSCHF did not create a single shoe-shaped sculpture to sit in a museum, [i]t created hundreds of shoes (at least 666) emblazoned with a Nike Swoosh that it sold to all-comers,” which is “exactly the business that Nike is in, and Nike’s valuable trademarks would be severely diminished if anyone were free to manufacture a shoe with a Swoosh simply by calling it a work of art.” Even if consumers did see it as art, Nike stated, the presentation of the company’s Swoosh would ultimately insinuate Nike’s involvement.

Here, the brand can only look in the mirror — as it let MSCHF run free after using its Swoosh in 2019 with the Jesus Shoes. But with this defense, the sportswear giant claims that it has not “ruled out pursuing relief related to the Jesus Shoe at this time,” and explicitly reserves the right to “amend its complaint to add allegations of infringement against MSCHF’s sale of the Jesus Shoes,” TFL reports.

Even Nike admits that the Satan Shoes had a bigger impact than MSCHF’s previous Jesus Shoes, stating, per The Fashion Law, that “the Jesus Shoe was a smaller release that attracted little attention and was not one that associated Nike’s brand with as charged a topic as satanism.” Because of the smaller impact, Nike asserts it did not have to take immediate action on the Jesus Shoes, but that “MSCHF’s prior infringements of Nike’s trademarks do not excuse its more recent infringements.”

The sportswear brand has also decided to take legal action not only to prevent the Satan Shoes from damaging its image, but any further “parody” shoes. If the brand only focused on the sinister shoes, while ignoring the past Jesus sneakers, MSCHF could release more unofficial projects with Nike — something it would totally do in spite of the legal trouble the brand is in. This suit may quickly bring MSCHF down for good, though, bringing along any other customizers whose work boasts a Swoosh (or anything resembling it).

But Nike’s lawsuit now begs the question: What would have happened if MSCHF had used the sneakers without its Swoosh logos? Consumers who aren’t sneakerheads may not have mistaken the shoe as Nike’s work, leaving the company out of any Satanic claims — and possibly clearing MSCHF from damaging Nike’s integrity. Leaving the Swoosh out of future projects could save MSCHF any more lawsuits, assuming it gets out of this one.