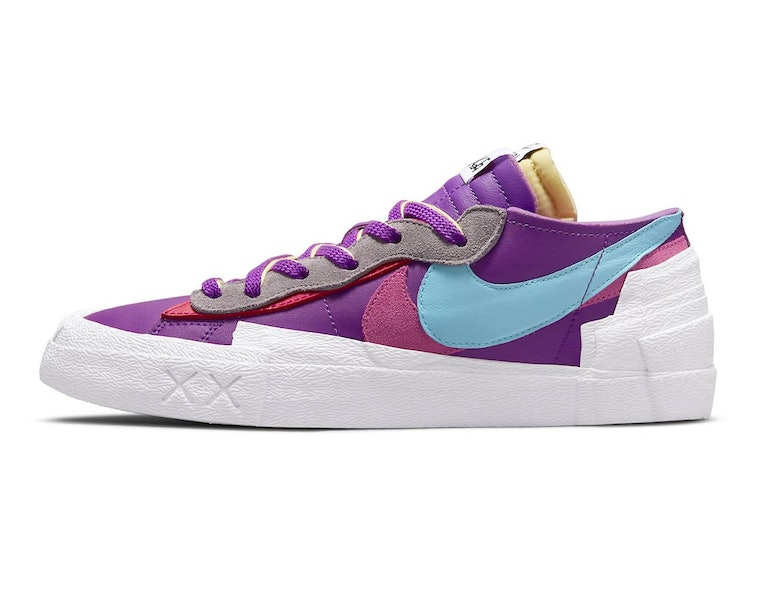 Sacai’s initial release of the Nike LD Waffle in 2019 was one of the best sneakers of the year, but in the time since the market has become oversaturated with its collaborative sneakers. More than 30 different color variants have released for Sacai’s LD Waffle, Vaporwaffle, and Blazer — but now the most egregious play is set to arrive with the help of streetwear’s most omnipresent artist.

Kaws is joining a three-way collaboration on the Sacai x Nike Blazer Low, bringing an additional four color schemes to the silhouette set to arrive over the coming weeks. "Neptune Blue," "Team Red, "Reed," and "Purple Dusk" variants all feature bright palettes native to Kaws’ artwork. Also carrying over is the artist’s “XX” eye motif, which is debossed into the Blazers’ midsole just below the toe cap.

Did the world need Kaws to add his name to a sneaker we’ve already seen plenty of? Absolutely not, but his inclusion will inevitably bring an increase of excitement for a shoe sneakerheads have otherwise grown tired of. The sneaker exists because it’ll sell — which is, unfortunately, too often the case when it comes to overwrought collaborations.

Double everything — Similar to its once-hot LD Waffle, Sacai’s Blazer doubles up on many of its key elements. Two Swooshes, two tongues, and two lace eyelets are all stacked on top of each other, while the heel is stacked with four levels of rubber.

Previous iterations of the Sacai Blazer can be had for less than $100 from resale platforms like StockX, but the most predictable of sneakerheads will suddenly fall in love with the silhouette now that Kaws is involved. The first two of his variants, “Neptune Blue” and “Team Red,” will release on Black Friday, November 26, with “Purple Dusk” and the yet-to-be-revealed “Reed” to follow on December 9.

For now, the releases have only been confirmed for both Sacai and Kaws’ websites, although an announcement for Nike’s SNKRS app could come soon. Retail is set at $140 a pair, and the inevitable upcharge on the resale market will serve as evidence that enough people have fallen for this cynical play.