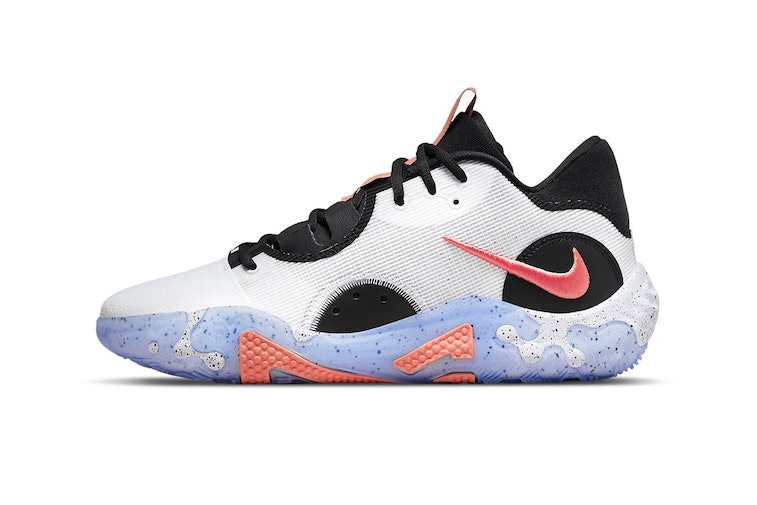 Paul George’s sixth sneaker in his Nike signature line is set to arrive this month, and it makes an emphasis of supporting the Los Angeles Clippers star’s high-level play on both ends of the floor.

The PG6 boasts Nike’s lightweight React Foam cushioning to provide responsiveness and support for all four quarters of a game. It’s a bit of an odd ball with its half-circles and curved lines, but it’s significantly more attractive than its predecessor, the PG5. And if you love icy blue outsoles, you’ll be into how the semi-translucent rubber reaches up to envelop the midsole for the PG6’s debut color variant.

George’s series comes on the lower end of the price scale for Nike’s signature basketball roster, making it one of the most approachable sneakers for basketball players of all ages. Few people are likely to pick up the PG6, or any contemporary basketball sneaker, for everyday wear, but it should be a reliable choice if you’re a regular hooper.

Goodbye Air — The PG series had used Air cushioning for its first five models, and the PG6 marks the first to switch over to React Foam. If anything, it’s surprising that Nike has taken so long to plug in React, as the lightweight and highly responsive foam has become a mainstay across most areas of its performance products since it debuted in 2017.

Nike hasn’t outlined the rest of the performance specifications for the PG6, but past releases have placed an emphasis on stability and the ability to make sudden changes in speed and direction. What we can see, however, is that a variety of meshes make up the upper, and a similar lacing system that pulls inward carries over from the PG5.

The PG6 is scheduled to release February 9 and should see widespread availability through Nike’s website and various third-party retailers. The final price tag, while not confirmed, should come in at around $110 — and we can expect a variety of other color schemes to release in the coming year.