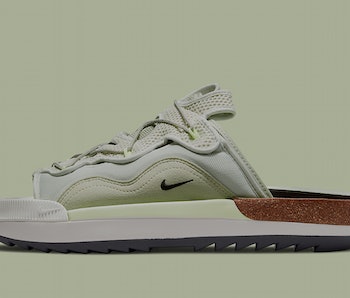 The pandemic has been a revelatory time for house shoes, creating a need for them unlike ever before but also happening to coincide with the release of many of the coolest we’ve ever seen. One such pair was Nike’s “Offline” mule, footwear intended for periods of unwinding and featuring a massaging insole.

It’s been less than a year since Nike’s “anti-sneaker” arrived at just the right time, and already the Swoosh has a sequel in store. Images have leaked of the Offline 2.0, essentially a souped-up version of its predecessor. Ideally, we’ll be spending much time at home going forward — but that doesn’t erase the need for a good house shoe for when you are still laying low.

If the 1.0 version was more of an out-and-out house shoe, 2.0 brings dual-functionality for a mule that would serve just as well outside your home. A more jagged outsole will provide better grip as you stray from smooth floors — but remember, once you’ve worn a house shoe out of the house, it’s tainted and no longer a house shoe.

What else has been upgraded — The Offline 2.0 has been retooled from top to bottom, most notably with a more complex midsole and as a slide instead of a mule. Cork now appears underneath the heel of the midsole, adding a more sustainable element in addition to what should become form-fitting.

Now that the toe has been cut out, the strap is revamped with mesh and suede construction with bungee-cord fastening for a more secure fit. Making a return is the set of removable insoles, which allows you to swap out a flat pair with one ribbed for... your foot’s pleasure.

Nike’s definition of “offline” seems to be expanding, and the new 2.0 slide should be great for moments of leisure outside the home. As much as we love the house shoe, we’re also huge proponents of sandals as a summer alternative to sneakers.

When is it dropping? — For now, we can’t say. It looks as if the Offline 2.0 will release before the original version even reaches a year old, but we’re just going to have to play the waiting game. Hopefully, we won’t see the price increase from $120 — but it’s very well possible with the shoe becoming more robust. The initial version also sold out each time it was stocked, so expect rabid competition once the 2.0 drops.