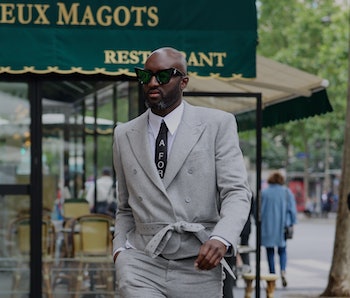 Virgil Abloh has confirmed his next Nike collaboration by sharing a leaked photo of the upcoming sneakers — although it’s hard to tell just what model they are. The designer’s added textured upper, track spikes, and criss-cross lacing system make the Air Force 1 Mid, one of Nike’s most prominent silhouettes, unrecognizable. “The shoes are a mere by-product of trying to define a larger idea of why shoes are technically meaningful, emotional & relevant. etc,” he wrote on Instagram.

Why Abloh is sharing photos of a mock-up — rather than the real Off-White Air Force 1 Mid he presumably has access to — is unclear. What may be more surprising, however, is the feedback fans are giving the designer on his shoe. Despite the hype surrounding the Off-White name, top comments on Abloh’s post critiqued the upcoming model: “Sorry Virgil, but this is trash,” one commenter wrote. “Y’all lying if you commenting [fire emoji],” read another.

Disguising the Air Force 1 Mid — While Abloh’s designs typically enhance the shoe he works with, his additions to the Air Force 1 Mid have convoluted the iconic sneaker — perhaps explaining the backlash from fans. The model is known for its clean lines and no-frills upper, making it a classic; Abloh has altered the sneaker with a textured white synthetic upper and ankle straps decorated with a gray gridlock pattern.

A criss-cross lacing system, heel pull tab, and curvy neon-accented midsole further muddle the Air Force 1 Mid. Recognizable features like the sneaker’s Swooshes have been made translucent, while Nike’s signature “AIR” midsole branding has been completely erased. Off-White branding takes over, slapped on the medial wall in its typical sans serif font.

Even more details, including track spikes at the toe and star-studded midsole blocks, make the Air Force 1 Mid look more like a running shoe than one initially made for basketball. Abloh has transformed the model into something of his own — but is that what fans want?

Missed the mark? — The designer’s Nike collaborations have been wildly successful, coveted by many and flaunting one of the highest sneaker resale values on the market. But part of what makes Off-White’s partnerships with Nike so successful is its unique additions to the shoe, which play on the model’s heritage while adding a modern touch.

Here, the Air Force 1 Mid’s historical features have been replaced entirely by Abloh’s own design, making the shoe more of an Off-White design than Nike’s. And as collaborations strive to combine two brands — not letting one overpower the other — we think Abloh may have taken a step in the wrong direction.