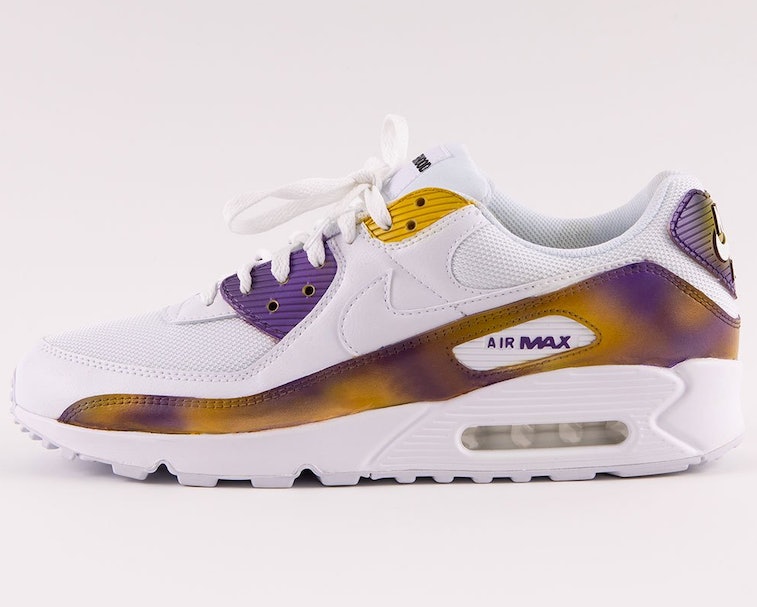 The NFL Draft commences on Thursday, bringing a moment of a lifetime, millions of dollars, and a wave of free stuff for a new generation of players. Nike is celebrating the occasion — and emphasizing that the more money you have, the less you have to pay for — by hooking up some of the top prospects with customized sneakers.

The lucky players are getting either an Air Max 90 or Air Force 1 done up with details referencing their lives. On the list is LSU' QB Joe Burrow (the likely #1 pick), Oklahoma WR Ceedee Lamb, Georgia RB D’Andre Swift, and Alabama WR Jerry Jeudy. Each of them is expected to be drafted in the first round.

The National Champion and Heisman winning quarterback has the dopest pair of the bunch, thanks to an insole that reads "Air Burreaux," a combination of his own last name and the "eaux" ending common in French Cajun names. LSU's purple and yellow get a sweet hand-painted effect on the AM90's mudguard, and a "Brotherhood" tag is on the tongue — the latter of which is on each of the players' custom kicks.

Ceedee Lamb's pair of Air Force 1s are less about where he played in college and more about his life prior. The red and gold color treatment is a combination of the primary colors from Oklahoma University and his high school, Foster High. A Fleur-de-lis insignia invokes his birthplace of New Orleans, and the number "32" on the opposite shoe is in reference to the late uncle that helped shape his career. On the insole is "Too Far From My Heart," one of his father's favorite quotes.

The Georgia running back's AF1s are straight Philly, where Swift is originally from. Blue and red are the colors of both the Phillies and 76ers, and the Philadelphia skyline adorns both lateral heels. Inside, the insole reads "Beyond Blessed" — because, you know, his rampant success.

The Alabama star gets the splashiest pair of all, with a silver glitter Swoosh and a large stamp of his jersey number on the lateral heels. For him, the blue and red is a callback to his Haitian roots. The "Zoe Life" insole is in reference to a religious phrase that's supposed to mean "the very life that God has within himself."