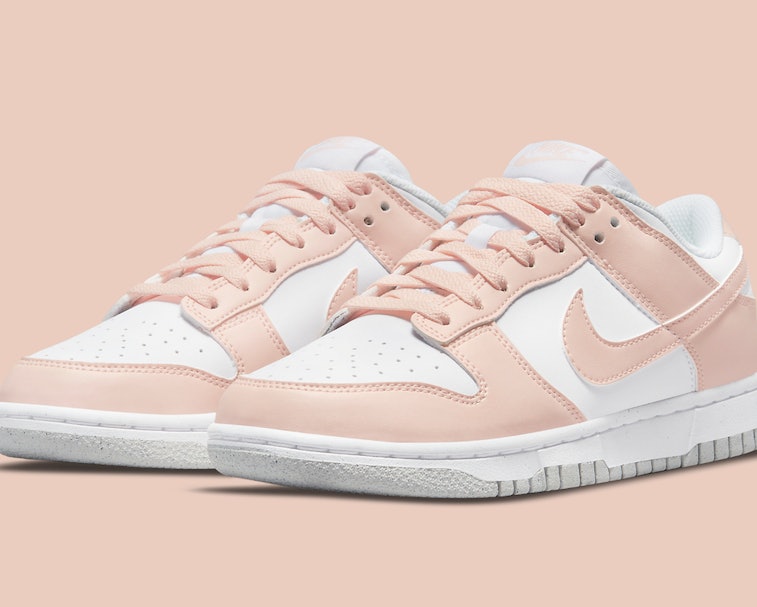 After creating endless variations of its Dunk Low sneaker, Nike has finally included the model in its “Move to Zero” efforts, infusing the popular shoe with sustainable features. Unlike past eco-friendly Nike sneakers, however, the Dunk’s design remains minimal, with only a Nike Grind outsole hinting at its ethical construction.

Arriving in all-white and light pink variations, the “Move to Zero” Dunk Low replaces its usual leather upper with one made of FlyLeather, a performance material that consists of at least 50 percent recycled leather fiber combined with synthetic materials. Nike claims FlyLeather has a lower impact on climate change compared to traditional leather, and has started to implement the leather alternative into more of its models in hopes of becoming more sustainable. The Swoosh joins hundreds of other brands looking to replace animal byproducts in its projects.

Nike needs a change in production — Despite their different makeup, the two Dunks look just like the ones made of leather and non-recycled materials. Only a neon green insole and speckled gray Nike Grind outsole nod to the sneakers’ eco-friendly makeover, making the shoes just as covetable, if not more so, than their original counterparts.

Ironically, the Dunk sneaker may be Nike’s most unsustainable sneaker: The brand has been rolling out pairs of the shoe at a relentless pace since hype for the model began building in 2019 — namely influenced by Travis Scott’s love of the retro sneaker. Its endless production cycle only contributes to already-existing Dunks, some of which are hoarded by resellers in hopes of flipping the sneakers for profit. While continuing to generate more and more Dunks isn’t ideal for the planet, we can hope Nike’s “Move to Zero” pairs are at least limiting the brand’s contribution to landfills each year.

To further its sustainability efforts, however, the brand should focus on moving its resellers to zero. By eliminating sneaker flippers, more real consumers would have the opportunity to buy Nike’s sneakers, and demand for each model would be somewhat reasonable. Getting rid of resellers — and lessening the demand for its sneakers — is not necessarily a priority for Nike, though: The brand still makes money no matter who is buying its products.

Coming soon — You can try to beat the resellers and bots when Nike’s “Move to Zero” Dunk Lows drop soon. Set to arrive on SNKRS for $100 each, the minimal all-white and light pink variations will likely see the same demand as their non-recycled iterations.