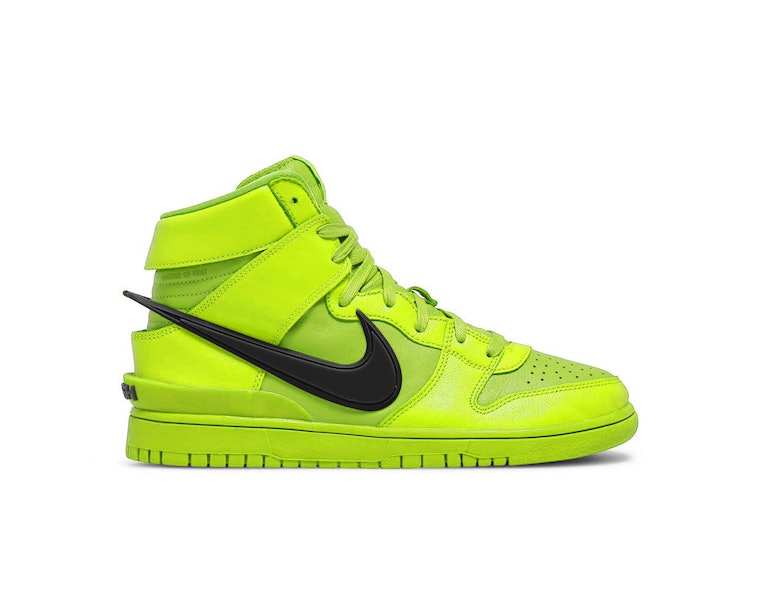 With a drop already scheduled for Ambush’s “Royal Blue” Dunk High, Yoon Anh is moving onto her next project. Last week, sources stated that another Ambush x Nike Dunk High sneaker was on the way, donning a neon green color scheme. Responding to the leaks, Yoon clarified in a recent livestream that the upcoming shoe would actually sport an electric yellow hue.

Partnering with Nike SNKRS, the designer spoke with Karrueche in a session titled “Unpacking the Dunk High x Ambush,” in which she shared sneak peeks at unreleased iterations of the coveted shoe. Similar to Yoon’s “Lethal Pink,” the latest pair boasts a tonal yet blinding upper, this time sporting an all-over neon yellow.

An un-mellow yellow — Reportedly dubbed “Flash Lime,” this sneaker marks the fifth Ambush x Nike Dunk High to emerge. Relative to the four models that came before it, Ahn’s latest design remixes the Dunk High silhouette ever so slightly. Donning a rubber Swoosh that extends off the heel of the shoe, an added rubber heel counter, and a tapered collar, the sneaker has been revamped to reflect Ahn’s multidimensional point of view.

To channel movement within the shoe’s design, Yoon used Japanese bike, car, and truck culture as inspiration, lengthening the Swoosh to imitate tailpipes. But if each model were to represent some type of vehicle, we could easily see the “Flash Lime” Dunk as an expensive sports car or racing motorcycle thanks to its vivid paint job.

Nearly the entire shoe has been doused in the highlighter yellow shade, including its upper, laces, sockliner, and sole unit. Offering a bit of contrast, Yoon’s exaggerated midfoot Swooshes come dressed in black, alongside matching black “AMBUSH” heel branding.

Highlight of the summer — During the SNKRS Live, Anh also made a point to show off her Ambush x Nike Dunk High “Chicago,” which she had previously revealed would not be for sale to the public. The designer kept quiet about the release details of her neon Dunk — though it’s important to note that she didn’t mention the shoes weren’t for sale.

Per sneaker insider @brandon1an, the “Flash Lime” Dunks are expected to see a release, coming as soon as later this summer. In a tweet, @brandon1an mentioned the collaborative shoe would likely drop in a few months alongside Yoon’s 2020 Tokyo Olympics collection, and would retail at the standard Ambush x Nike Dunk High price of $180. Whether you’ll be lucky enough to score a pair when they drop is a different story.