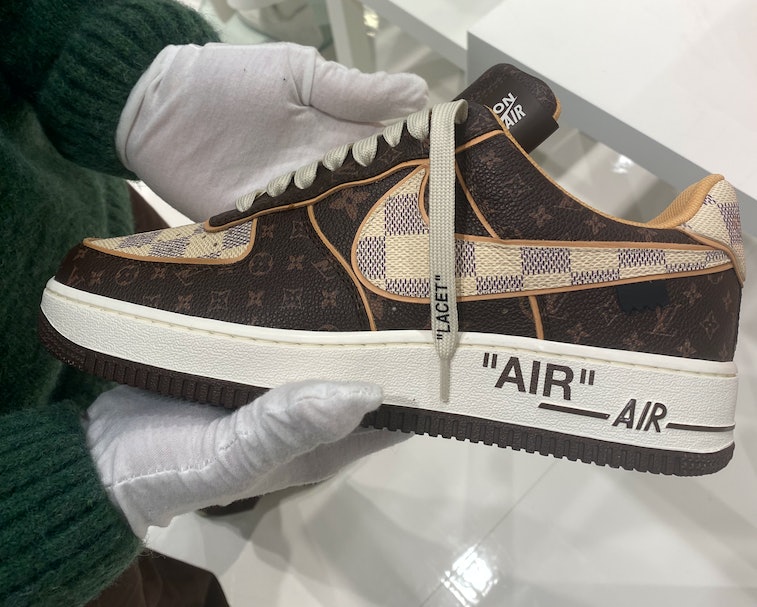 The auction for Nike’s first Louis Vuitton Air Force 1s has closed with the highest-selling pair fetching an eye-whopping $352,800.

Designed by the late Virgil Abloh, the lone size 5 pair of the super-rare sneakers set the high mark among the 200 pairs auctioned by Sotheby’s — and it came in well ahead of the second most expensive, a size 9.5 that sold for $201,600. More than 150 of the pairs available sold for $100,000 or more, possibly establishing a new landscape for sneakers in the auction market.

Prior to the monumental first collaboration between Louis Vuitton and Nike, such prices were typically seen for historical sneakers more than 30 years old and more often than not worn by Michael Jordan during his playing career. In April 2021, when we published a list of the most expensive sneakers ever sold at auction, only eight pairs had ever eclipsed the six-figure mark. Less than a year later, that number has now increased by nearly 20-fold.

Will we ever see something like this again? — While an abundance of sneakers selling for such high prices could reset the market, the Louis Vuitton x Nike auction does come under very specific circumstances. Closing times for the sneakers had to be pushed back by Sotheby’s because of “technical issues,” according to Complex’s Brendan Dunne, which very well could have been because of unprecedented traffic on its website.

The fact that the Air Force 1s denote the French luxury house’s first collaboration with Nike, or any other sneaker brand, would have set the bar high on its own — but the unexpected passing of Virgil Abloh in November has only made the sneakers more covetable. These AF1 shoes are amongst the very last designs by the groundbreaking designer, and the only place to get them was through the historic auction.

The collision of Louis Vuitton’s signature motifs, Virgil Abloh’s design language, and Nike’s classic Air Force 1 silhouette were made available exclusively through Sotheby’s. So too was a special-edition leather sneaker case with insignia from both brands included in each lot. Proceeds from the auction will go to the Virgil Abloh “Post-Modern” Scholarship Fund, which supports the education of Black students.

Abloh designed a total of 47 different iterations of the Louis Vuitton Air Force 1, some of which will go on sale at a later date through a more standard release. Select pairs were also given to people who had inspired Abloh and won’t ever receive a public release. Eventually, each of the 47 sneakers will be available to view through a Louis Vuitton exhibition, which is the closest most of us will ever come to them.