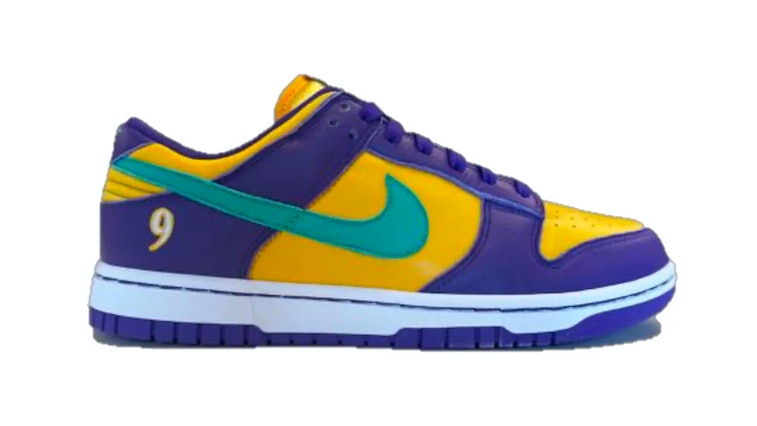 Lisa Leslie may have retired from professional basketball over a decade ago, but her legacy lives on. And to commemorate the 20th anniversary of her legendary 2002 dunk in the WNBA, the first in the league’s history, Nike is releasing a Dunk Low sneaker in her honor.

The sneakers revolve around Leslie’s original Los Angeles Sparks team, tapping into its signature color scheme. Gold covers the uppers, while the overlays and outsole are done in purple. Swooshes take on an accenting teal color, along with Leslie’s “9” jersey number near the heel.

Sparking conversations — The California native’s professional basketball journey led her to the Los Angeles Sparks when the WNBA was founded in 1997. Not only did she make eight All-Star teams and win three MVP titles, she also led the Sparks to two WNBA championships in 2001 and 2002. Leslie was the first WNBA athlete to dunk in the league’s history and got a signature shoe of her own in 1998, the Nike Total Air 9. The upcoming Dunk is connected to Leslie if only by name, aligning with the Swoosh’s persistent overload of recent Dunk releases.

Nike’s recent announcement to invest $75 million into the WNBA could give its athletes overdue recognition. Now that the WNBA is valued at $1 billion thanks to Nike and other investors, this could be a chance to open the gates of female athlete merchandise, which will hopefully get better after this Sparks-inspired Dunk.

Can’t cop just yet — Given that Leslie’s historic dunk was recorded in July, it’s worth guessing the sneaker will see a summer drop, though Nike has yet to release any official information besides a document obtained by Complex. Brendan Dunne reported that it’s unclear whether the shoe is solely inspired by Leslie or if she’ll play a part in any official release campaign.

Dunne also mentioned that the shoe’s design is subject to change, as these things sometimes go. Regardless, if looking to the past is the fastest way to get new WNBA merch on the SNKRS drop calendar, then anything’s fair game.