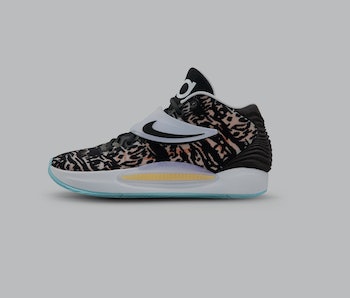 For the 14th sneaker in his signature line, Kevin Durant and Nike are throwing it back to another beloved style. The “KD14” takes design cues from the “KD4,” considered one of the best models in the series, while bringing back a midfoot foot strap for the first time in seven years. Cementing itself even further in the past are echoes of the Air Presto, where the simplified one-piece strap is pulled from.

“It’s been a while since we incorporated the strap, which excites me,” Durant said in a press release. “My other favorite part of the shoe is the cushioning, which helps me feel low to the ground and still helps give me some of that energy back.”

The KD14’s cushioning comes courtesy of a full-length Zoom Air Strobel, which has been used for the last three Durant models. A wide outsole also maximizes contact with the ground, a pursuit that’s been central to all of the KD sneakers.

An upper with a lot of possibilities — An engineered mesh upper is launching with tiger stripes atop a visible bottom layer, and Nike is already hinting at graphics that will invoke art, music, and more in the future. On the strap is a thin, elongated Swoosh pulled from the original Bruin model.

We haven’t been shy about our desire to see more basketball sneakers cross over into the lifestyle space, and the KD14 isn’t going to make any progress there. But if it feels and performs anything like the KD4 that it bears resemblance too, it’ll be among the best hooping shoes you’ll ever wear. Athletics are the priority after all, and for that reason we can forgive the strange panel on the midsole.

Launching this week — The black and white version of the KD14 pictured here has already launched around the globe, and the United States will follow suit this Wednesday, April 14. A “Cyber” variant also released yesterday exclusively in Asia, but you can rest assured that plenty more color schemes are on the way.