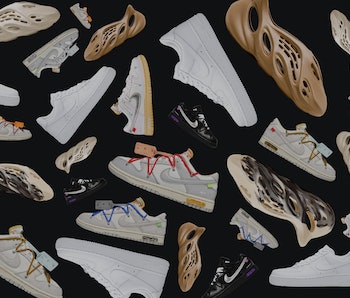 It’s worth noting that Lyst’s data — accumulated from Google search data, social media mentions, and shopper behavior — don’t speak for all fashion consumers thanks to the overwhelming different ways to shop. Although most may take to the internet to find a desired item, Lyst’s data doesn’t necessarily include shoppers who use apps to purchase or search for goods, and should be taken with a grain of salt (sorry Ye).

Too hot to handle — Nike’s Air Force 1 sneaker is already popular with sneakerheads, who favor the all-white sneaker as an easy go-to or a blank for customization. Yet this year saw searches for the shoe go up 248 percent, says Lyst, making the classic model the hottest sneaker of the year — surpassing Nike’s Dunk, in fifth place. The AF1’s increasing popularity can be attributed to Gen Z shoppers entering the market, Lyst reports.

As expected, hypebeast favorites from Nike and Yeezy ranked high too, with searches fueled by overwhelming demand and subsequent resale value. Nike’s Off-White “The 50” Dunk Low was named the second hottest sneaker of 2021, while Yeezy’s Foam Runner — a questionable “sneaker” — came in third. The limited-edition Dunks, which originally retailed for $180, were resold at a 400 percent markup as the Foam Runners, initially $75, resold for up to 720 percent more than its retail price.

Both shoes were only available to shoppers through a lottery-based draw, restricting their winning odds alongside factors like resellers, bots, and limited stock. But Lyst’s data suggests Yeezy and Nike’s exclusive methods work: By limiting their products so much, the brands have been able to keep up demand for their respective Dunks and Foam Runners. Interest in the products won’t disappear until everyone has a pair — which won’t be anytime soon.

Following the same exclusive marketing plan, limited-edition collaborations like Adidas’ Ivy Park, The North Face x Gucci, Telfar x Ugg, and Yeezy x Gap make up the hottest partnerships of the year. The latter, which gives people a chance to own a piece of Ye’s daily uniform, ranked the highest with more than 50,000 searches for the collaboration in a span of 24 hours.

From IRL to URL — Hype aside, shoppers are also indulging in the shift to the digital world, which NFTs, virtual fashion shows, and gaming partnerships have helped encourage. Balenciaga’s Fortnite collaboration saw a 72 percent increase in online searches, reports Lyst, as well as a 49 percent uptick in searches for Balenciaga alone. Brands like Nike and Gucci have followed Balenciaga into the metaverse, guaranteeing an expansion of digital fashion.

While Lyst’s findings can’t speak for society as a whole, its data is nonetheless interesting. Could we soon be walking around in digital Nike Dunks (if we can get them)?