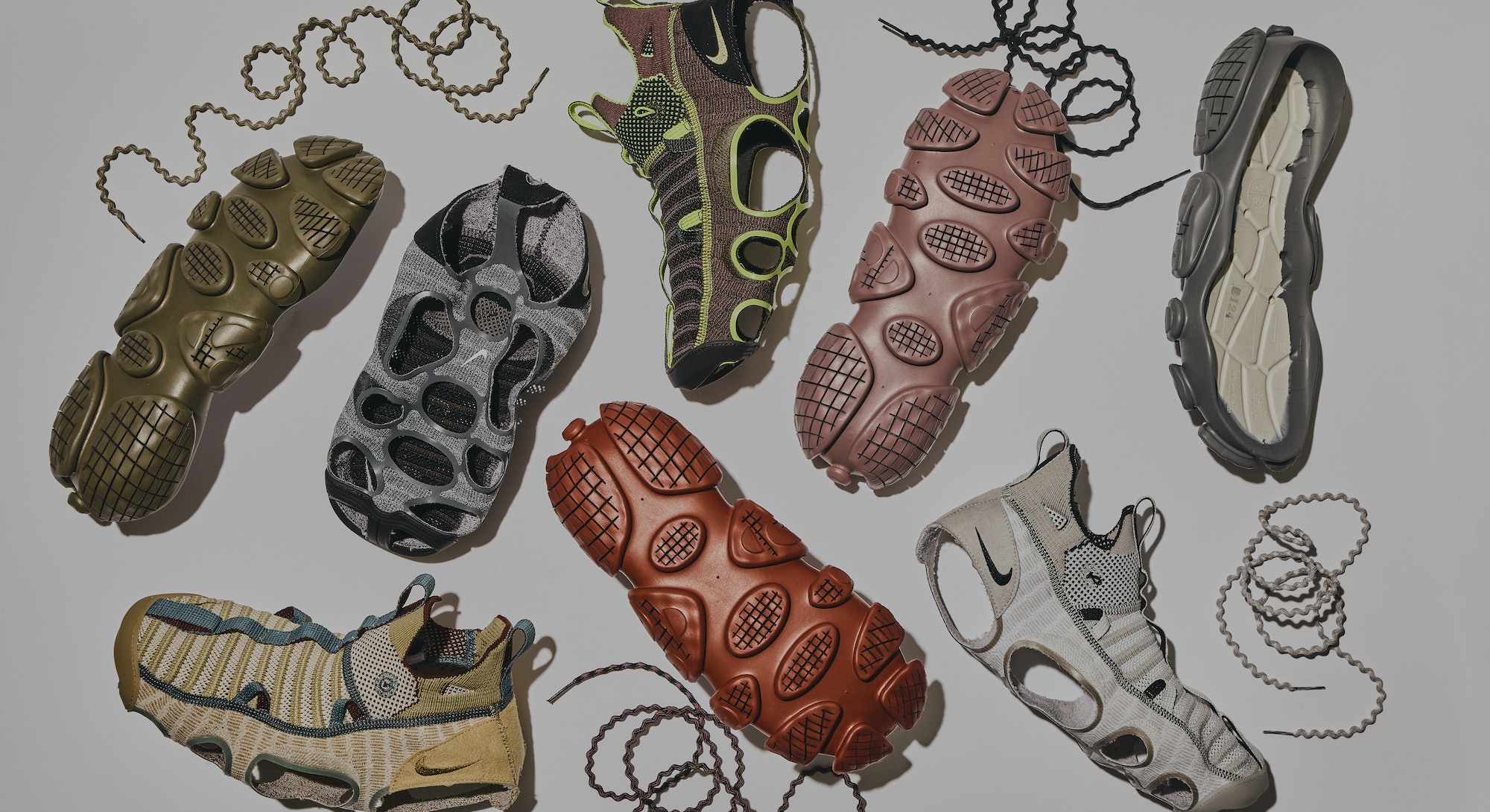 As the climate changes, so do the demands of athletes.

Nike is prepared to combat both with its two upcoming sneakers, dubbed the ISPA Link and ISPA Link Axis. The two new silhouettes are designed for circularity and are held together only by tension. Without any glue used for construction, the sneakers can easily be taken apart at the end of their wear cycle for recycling. Afterward, the ISPA Link and ISPA Link Axis could become anything from a water bottle to a basketball court.

Nike revealed the sneakers last week during a press conference for its new Serena Williams Building at its world headquarters in Beaverton, Oregon. The brand’s VP of footwear design Darryl Matthews touted the shoes as Nike’s next step forward in sustainability and broke them down both physically and in regards to how they were made.

Matthews oversees the Nike ISPA team, working with an intimate team of only three people. Only two of those people designed the revolutionary footwear, he tells Input, although both the ISPA Link and ISPA Link Axis were advised by other teams at Nike, including the sustainability and ACG teams. Past products, including the 2003 Presto Clip and 2005 Zvezdochka, also helped inform the designs.

ISPA stands for improvise, scavenge, protect, and adapt, four actions that all apply to Nike’s Link and Link Axis sneakers. With a circular design principle of “disassembly” in mind, the ISPA team sought to create a product that could easily be taken apart and recycled, allotting it a smaller carbon footprint and longer life cycle. That idea, however, was much easier said than done. “It was a giant puzzle trying to figure out how to get [the shoes] to withstand the human body,” Matthews says.

Taking a shoe apart is nearly impossible with glue and other bonding elements, and recycling sneakers involves an energy-intensive shredding process. Creating a shoe with removable components — without sacrificing style or quality — thus required breakthroughs in engineering, product development, and 3D design.

“You have to completely understand how to undo a product before redoing it.”

“Design for disassembly requires you to think about how [the product] is made,” he adds. “You have to completely understand how to undo a product before redoing it.” In creating the Link and Link Axis, the ISPA team replicated the movement of the product to identify where its pressure points were, as well as where components may not hold together.

Without glue, the sneakers’ three removable components — a knit upper, tooling, and cage sole — requires a dedicated production line, with each shoe taking only eight minutes to construct. No tunnels, heating, or cooling rooms are needed, significantly reducing the sneakers’ carbon footprint. “We’ve designed new tools for [the sneakers] to be put together, which never existed before,” says Matthews.

Both the ISPA Link and ISPA Link Axis are made so that you can separate the uppers from the sole unit. The Link, which arrives in June, features a 100-percent recycled Flyknit upper while its futuristic outsole also includes recycled materials and is inspired by cut mangos.

Swoosh branding decorates the lateral heel and soles of both sneakers, while the Link Axis features ISPA branding atop its clear midsole. As of now, the Link takes on more neutral earth tones, and the Link Axis boasts a bright combination of blue, yellow, and pink. Because of the removable component, there will be plenty of room for customization — allowing customers to become what Matthews calls “co-creators.” Nike has not yet confirmed if it will sell components for two sneakers separately or offer the models as part of its By You customization program.

“I want people to buy these sneakers not because they want to buy them but because of the story, the process, and the education that’s gone into them.”

Matthews and the ISPA team have recontextualized what exactly a shoe can be. When the Link and Link Axis are recycled, they could become the Nike Grind material that the brand uses for water bottles or playgrounds. Matthews believes the longevity of the sneakers will be the main selling point, rather than their looks. “I want people to buy these sneakers not because they want to buy them,” he says, “but because of the story, the process, and the education that’s gone into them.”

For Matthews and Nike, there’s no specific person that will be attracted to the Link and Link Access besides those with similar appreciation for circulation. “It’s a mindset,” says Matthews — one he’s hoping will catch on as the sneakers see their launch.