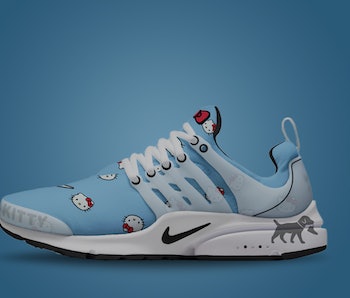 Almost two decades ago, Nike produced a hyper-limited run of Hello Kitty-themed Air Prestos to celebrate the Japanese character’s 30th anniversary. Although the 2004 collaboration was supposed to be a 500-pair release of four different styles, plans changed to include only a handful of pairs doled out to friends and family. The cancellation was anticlimactic and disappointing for most, but curiosity has simmered over the years as sneakerheads never lost hope of acquiring a pair.

Buzz picked up again earlier this year as images of the collection surfaced, sparking rumors of a first-ever public release. But without an official release date, the collection stayed a rumor — until now. Nike’s Hello Kitty Air Presto sneakers and apparel will apparently drop this summer, according to Sole Retriever.

Cat’s out of the bag — While there were four color schemes involved in the original collection, Sole Retriever reports that the pcoming drop will only include a white and sky blue pair. The sky blue uppers is decked out in an all-over print of Hello Kitty’s signature face graphic. Translucent caging stretches from the midsole to the laces and connects to the equally translucent heel. Black appears on the lace eyelets, sock lining, midsole Swoosh, and outsole — while white coats the laces and midsole. More branding is found with “Nike Air” at the heel and “Hello Kitty” spelled out across the toe.

Leaked images of the apparel featured a t-shirt and shorts, which will likely drop alongside the sneakers, each of which are adorned the same Hello Kitty face.

Everyone’s favorite kitty — The original Hello Kitty collection is almost an urban legend to some sneakerheads given its elusive backstory. Now, a proper release will see the effects of modern hype culture applied in a way that wasn’t around back in 2004 — most prominently with astounding resale prices.

If the whispers are to be believed, the long-awaited capsule will drop May 27 at Nike and select retailers. It will see full family sizing with a price tag of $145 for adults, $100 for preschool, and $80 for toddlers. Whether you’re a fan of cartoon cats or underground sneaker hype, these sneakers could be for you.