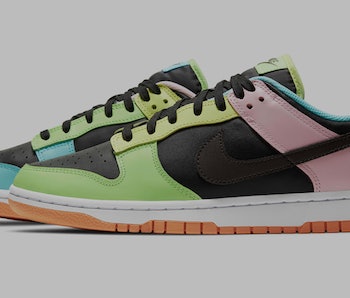 Nike's steady hefty churn-out of the Dunk will soon continue with one of the best versions we’ve seen this year. The highly anticipated “Free.99” Dunk Low has finally been given a release date — as well as confirmation that it isn’t, in fact, gratis.

The colorful pastel palette takes inspiration from bodegas that (apparently) give out free candy for springtime celebrations. But the best detail of all comes tucked away on the insole, where “Free.99” tags are piled on top of each other. Rounding things out is a gum outsole, which is quite simply almost never the wrong choice.

Early leaks suggested there would be two different sneakers releasing under the “Free.99” tag, with a primarily white pair making use of primary colors. That second version, however, is nowhere to be seen now — suggesting it’s been shelved or perhaps will come later down the road.

Another mismatched Dunk — Nike has already released several pairs of mismatched Dunks this year, including the extremely bonkers and instant classic “What The P. Rod.” that dropped earlier this month. With the sneaker landscape more flooded than ever, imbalanced kicks are an easy way to stand out — and stand out the “Free.99” does.

Pink, yellow, green, and blue hues that look like taffy are rotated across the left and right shoe on the tip, eyestay, lining, foxing, tongue patch, and backtab. More consistent are the vamp, quarter, tongue, laces, and Swoosh — which all appear in black on both shoes. A white midsole is also constant, as is the sneakerhead-favorite gum outsole.

Not free, but still a good price — The “Free.99” Dunk Low will run just $110, a cheaper price tag that’s normally exclusive to the SB versions. If you’re lucky, you’ll be able to get them for the relatively low price come 10 a.m. ET on June 8, when it releases through the crapshoot that is the SNKRS app.

If you do miss out, don’t fret — another mismatched pair is likely right around the corner.