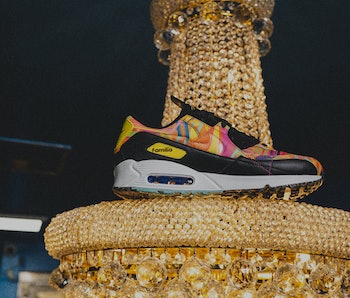 Between Latino Heritage Month and Día de Muertos, Nike is going to have a busy few months for sneakers celebrating the culture. Just last week, the brand released a three pack of “Lucha Libre”-themed sneakers, and now the Swoosh is preparing to drop yet another Air Max 90 as part of its LHM lineup.

Similar to last year’s Día de Muertos releases, the Air Max 90 LHM is an ode to “Familia.” The word replaces the typical Air Max branding that appear’s on the sneaker’s lateral side logo window and is also printed inside on the sock liner. But the real draw is the the patchwork technicolor print that appear’s across the upper and which Nike says represents the “expressive, family-oriented bond shared across Latino culture.”

A black mudguard, eyestay, tongue, and outsole help balance the noisey upper while the midsole is rendered in an off-white. Yellow is then used for the mustache and logo window, while the outsole is broken up with yellow or blue for a mismatched effect across the two sneakers.

A great time to be a Latino sneakerhead — Nike has been ramping up its Latino-oriented sneakers and also released an Air Max 97 for New York City’s Puerto Rican Day parade late this spring. (Call it a redo for last year’s Air Force 1 that had to be cancelled because Nike messed up the Puerto Rican flag.)

The biggest moment for Latino visibility at Nike, however, came through the rainbow-colored Air Jordan 1 released last December in collaboration with J Balvin — the first Latino artist to partner with the brand. The Columbian singer first debuted his kicks during his Super Bowl halftime appearance much earlier in 2020, leaving them on the slate as one of the most anticipated sneakers for the near entirety of the year.

Nike’s AM90 LHMs are scheduled to release September 29 through Nike’s website and select retailers in a full family size run. As we draw closer to November, Nike’s annual Día de Muertos will also be revealed and is rumored to include a rather brilliant pair of Air Jordan 1s.