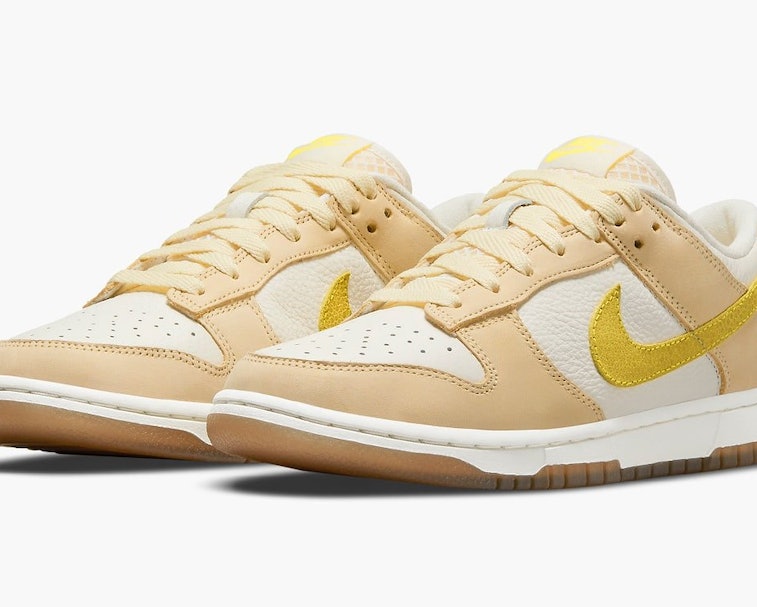 There’s no question that Nike’s most covetable silhouette at the moment is its Dunk, which has sold out in minutes at every drop. People can’t get enough of the model, and Nike is feverishly working to ensure everyone can cop a pair. The brand’s latest Dunk, dubbed the “Lemon Drop,” is exclusively for the ladies, and features a summery yellow design inspired by its namesake fruit.

After the Dunk was introduced to the Nike By You customization program — unsuccessfully, I might add — it sold out immediately, leaving plenty of sneakerheads Dunk-less. Since last year, it’s become impossible to score a pair of the highly sought after shoes without paying top-dollar for resale. With this drop and its upcoming spring Dunk drops, however, it looks like Nike is trying to make the silhouette more widely available.

Sweet and sour — Nike’s next Dunk features a light-colored base that allows its overlays to shine in the spotlight. Smooth yellow leather panels in the shade “Zitron” sit on top of the shoe’s tumbled white leather, instantly giving the sneaker a sunny look. Neon “Opti Yellow” on the Swoosh enhances this summery feeling, while also playing into the shoe’s fruity theme. With a patterned suede, the Swoosh replicates the appearance of condensation, as if the shoe were a cool glass of lemonade.

The Swoosh’s same bright yellow plays into the tongue and footbed branding, as well as the heel overlays. Meanwhile, the lighter “Zitron” shade can be seen on the laces and tongue, which is made out of mesh to mimic a lemon fruit bag.

Possibly the best detail of the shoe, however, is an embroidered lemon graphic on the lateral heel, which wraps up the Dunk’s zesty palette. Made up of the same intense hue as the Swoosh, the lemon stands out against a white midsole and translucent gum brown outsole.

A lemony launch — What might be Nike’s sweetest sneaker yet doesn’t have a drop date, but its radiant shades and fruity theme have us prepared for a summer release. The women’s exclusive should round out around the usual Dunk price of $100, but with demand skyrocketing, we’ll have to wait and see.

In the meantime, Nike has a bunch of other Dunk silhouettes dropping soon — like, next week soon — and we’re praying to the SNKRS gods that we cop. Two men’s Dunk Lows, in shades “Medium Gray” and “Hyper Cobalt,” are scheduled to launch February 18 at 10 a.m., alongside a women’s Dunk Low in “Coast.” Later, on February 25, the high top version of the silhouette will debut in “Vast Gray” and “Football Gray.” Here, it’s not a question of which one to cop, but how.