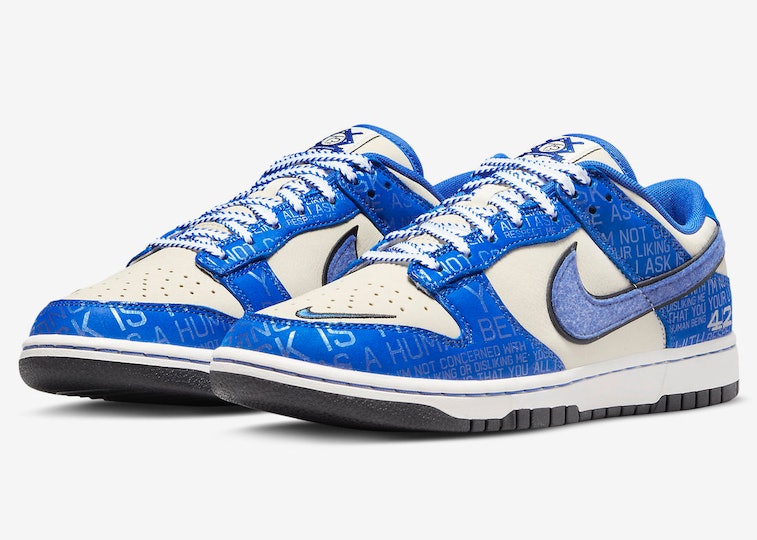 Nike has redesigned its Dunk Low sneaker in honor of Jackie Robinson. Dressed up in white and blue — classic colors of Robinson’s team, the Brooklyn Dodgers — the sneaker is set to debut on the 75th anniversary of the baseball player’s first official game, which made him the first Black player in Major League Baseball. A metallic font decorates the shoe’s overlays, spelling out one of Robinson’s legendary quotes: “I’m not concerned with your liking or disliking me. All I ask is that you respect me as a human being.”

Robinson broke the race barrier not only in baseball but in all sports, becoming a role model for future athletes. He was an immediate success on the field and was even selected as Rookie of the Year, attaining a league MVP title only two years later. His legacy within the sports world is one worth remembering — and in Nike’s case, repping on your feet.

Old-school detailing — While the Dunk itself was originally created for basketball, plenty of details throughout the sneaker nod to Robinson’s historic baseball career. Up top, white laces are accented by blue stitching, not unlike the stitching seen on baseballs. Special edition branding at the tongue commemorates the 75th anniversary of Robinson’s game, displaying the number atop a graphic of a baseball diamond. At the lateral heel, Robinson’s jersey number (42) appears in metallic silver, while his chosen quote decorates both the sneaker’s overlays and insoles.

Cream leather bases add a vintage look to the Dunk Low, an effect only heightened by the sneaker’s two Swooshes. The main Swoosh features a black leather base contrasted by a blue wool overlay, perhaps nodding to vintage varsity jackets. At the toe, a small embroidered Swoosh mimics the color scheme of its larger counterpart.

Robinson’s quote on respect decorates royal blue overlays, although overlapping words make it difficult to read. Matching blue stitching breaks up the white midsole, nodding again to the baseball theme, as a black outsole finishes off the sneaker.

Just in time for baseball season — To truly commemorate Robinson, the Dunk Low will launch April 15 — exactly 75 years after the baseball player started at first base for the Brooklyn Dodgers in 1947. If you’re ready to rep the history, look out for pairs of the limited-edition kicks on SNKRS.