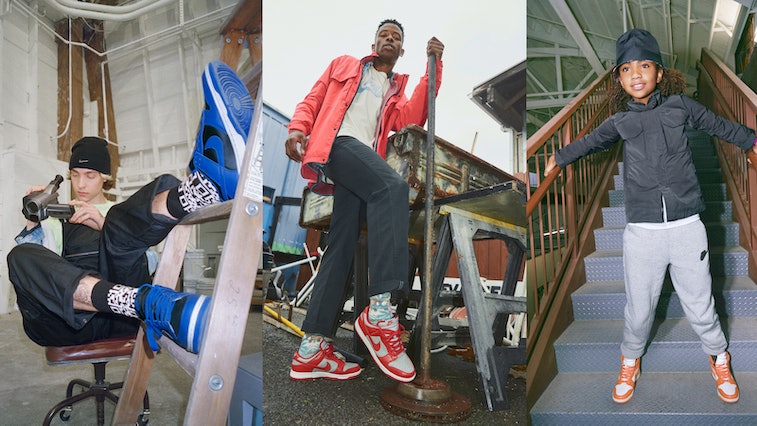 Nike has been reissuing retro models for some time now, but no silhouette has returned with as much force as the Dunk. With each drop selling faster than the last, Nike is prepared to satiate hungry fans with new spring colorways of the shoe. Consisting of five different Dunk Lows and a single Dunk High, the offerings “bring new perspective to the Dunk’s iconic colorblocking,” according to the brand.

Nike is trying its best to give everyone the Dunk they desire. To kick off the new year, the label announced it was adding the silhouette to its Nike By You program, allowing consumers to customize a Dunk Low in an array of colorways and leather textures. Of course, some colorways aren’t available, seeing as they’re reserved for special drops like this upcoming one.

Funky dunks — Three Dunk Lows are set to drop in January. The first pair, coming in men’s, women’s, and kids’ sizes, boasts a clean cut black and white colorway. The second, only for men and kids, bears a striking resemblance to the legendary "UNLV" from the '80s, which was later reimagined by Virgil Abloh for an Off-White x Nike collaboration in December 2019. The newest iteration stays true to both designs with similar “Varsity Red” and “Medium Gray” shading.

The third Dunk Low, a women’s exclusive, is fit for the warmer months. The sneaker’s pearl and light pink shading can be paired with anything from a dress to your favorite graphic tee. For those who want a bit more color, another women’s Dunk Low seems to be inspired by the iconic "UNC" hue. Sporting a white and powder blue colorway, the “Coast” sneaker is sure to be one of the first to sell out — especially considering it drops before any other shades.

Although there’s no specific release date stateside, the "Red" and "Coast" shades drop in Europe on January 14th, with the "Black" following suit one week later on January 21st. Maybe Nike is punishing the U.S. after Dunk colorways were leaked last year.

One of the exposed Dunk Low models, however, does have a U.S. drop scheduled. Highly anticipated “Hyper Cobalt,” which boasts a black and bright blue colorway, will launch February 11 in men and kid’s sizing. Meanwhile, the spring collection’s singular Dunk High releases March 5. In sizes for everyone, the “Orange Blaze” shade is directly inspired by the famous “Syracuse” colorway, featuring a bright orange and white makeup.

We Want the Dunk Date — While some Dunks remain without a drop date for now, all styles will be available globally through Nike SNKRS. Since the sneakers are guaranteed to sell fast, we recommend picking out your favorite pair in advance.

Eagle-eyed observers may notice that select styles from the leak are missing from this official announcement — a possible indicator that they’ll be releasing later in the year, perhaps as part of the brand’s summer Dunk lineup. So, if you somehow fumble all the Dunk opportunities Nike has handed you, there’s more on the way.