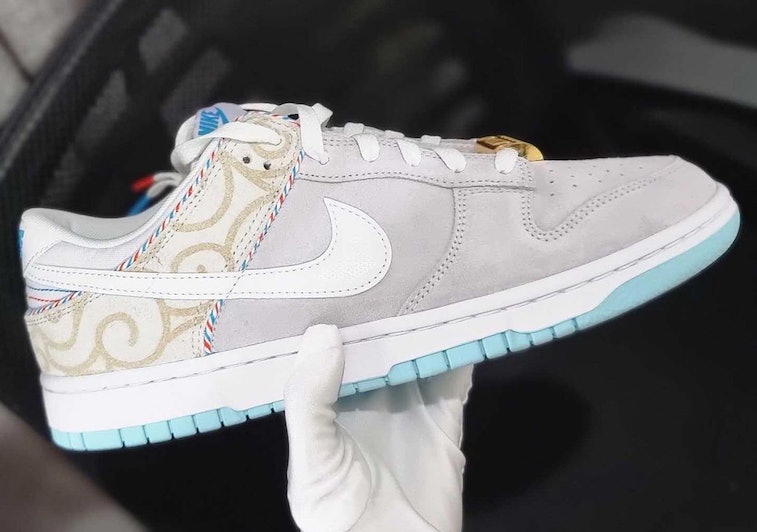 Here’s Nike’s reminder to make that haircut appointment. The Swoosh just added another color to its upcoming “Barber Shop” pack, a collection that aims to highlight the hairdresser community and the importance of a fresh cut. Detailing throughout the shoes is what gives the official nod to the barber community with inspiration from their storefronts and equipment.

A style that will never fade — Nike’s latest Dunk Low is constructed from cool light gray suede that’s paired with a white midsole and light blue outsole. A beige, swirled wave pattern made of hairy suede stretches from lace to lace and around the heel, while red and blue stitching on the rear pays tribute to the traditional barber pole color scheme. The Swooshes and laces are white to give slight contrast to the gray. For a finishing touch, the dubrae features an oversized gold clipper guard with an embossed Nike branding.

The white pair joins its counterpart that leaked last month, which features similar construction and graphics, according to the official images that just dropped. On the darker version, the shoes are dressed in black uppers and the light blue shade covers the outsole, Nike Swoosh logos, and collar lining. The wave pattern is cut into the heel’s black leather to reveal a brown cork-like shade. Silver coats the clipper guard dubrae instead of gold, and design contrast seems to be the main player as opposed to the more cohesive white pair.

Nike is making sure it covers all the professional bases lately as it adds barbers to their existing lineup of shoes honoring medical professionals, dancers, postal service workers, and more. Who do you think will be next?

The Nike Dunk Low “Barber Shop” pack won’t hit the shelves until 2022, but expect a price of $110 and a release at Nike and select retailers. Hey, maybe they’ll drop close to March 13 — National Barber Day.