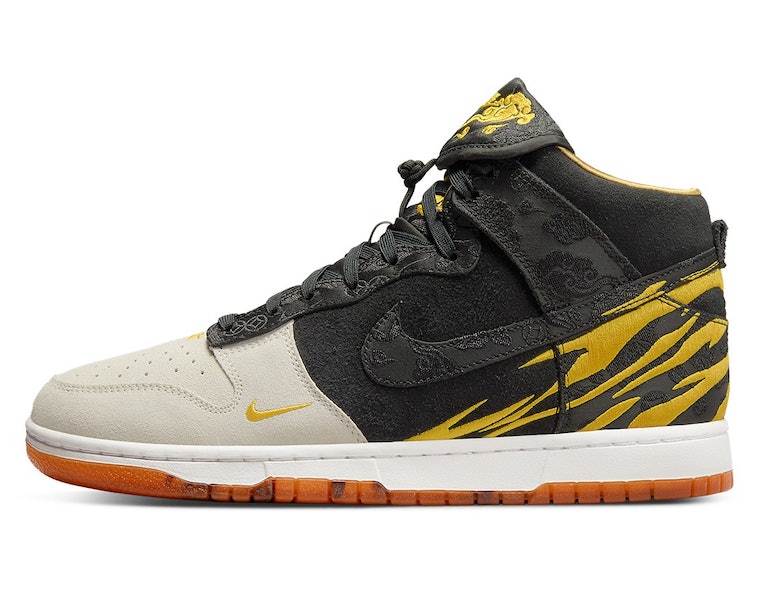 With Chinese New Year less than a week away, Nike has been unusually quiet about its plans for the holiday. Supply chain issues likely mean a delay for the Swoosh’s annual sneaker assortment, but images have surfaced for one that’ll be well worth the wait.

The Dunk High is undergoing a transformation for the Year of the Tiger by adding stripes and ornate embroidery. Atypical color blocking sees the tip and vamp rendered in grey suede, while the rest of the upper portion is black with gold tiger stripes bleeding over from the foxing and onto the quarter. Embroidery pulled from ancient Chinese iconography then appears on the Swoosh and eyelet and a fold-over tongue with further hints of gold.

Nike has yet to confirm a release date for its Dunk High “Year of the Tiger,” but hopefully we can expect the sneaker to release some time before the end of February. Whenever it comes, it could very well be the best Chinese New Year-themed shoe we see in 2022.

It’s all in the details — Flipping over the shoe reveals a semi-translucent gum outsole with additional tiger stripes visible underneath. This detail shows that Nike’s going all out for the Year of the Tiger, and there are even more to appreciate on the shoe if you look closer.

Embroidered onto the vamp are the Chinese characters for “good fortune,” which certainly applies if you’re able to land a pair, and “ward off evil,” which in this case should mean dreaded resellers. Flipping up the tongue reveals three gold ingots embroidered onto the underside, and inside the shoe the sockliner is rendered in a striking gold satin.

For now, we’ll just have to play the waiting game for the Dunk High “Year of the Tiger” and hope good fortune falls on all of us with patience. Nike has announced, however, a series of initiatives intended to sure up its supply chain, so delays could soon become a thing of the past.