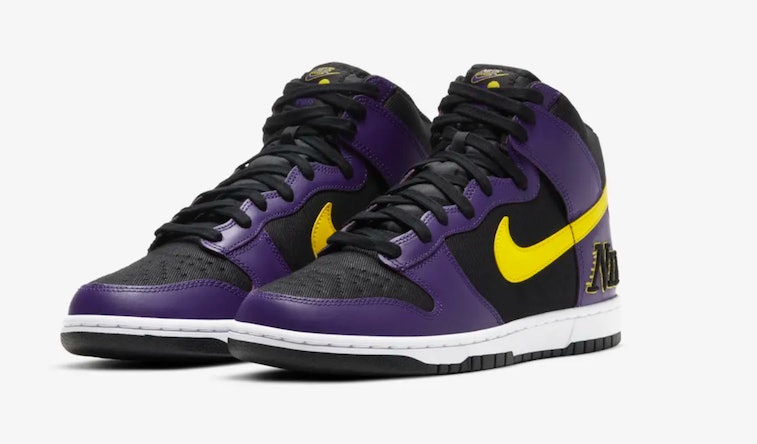 With the Lakers coming off an NBA title and the Dunk silhouette taking over the sneaker world, it makes sense that Nike would capitalize on both by creating a Dunk High. Dubbed the Nike Dunk High “Court Purple”, the sneakers boast Nike branding, done in a Laker typeface, embroidered on the heel. Channeling a vintage look, the footwear also features retro logos, mimicking Nike’s gear from its competitive era of training sportswear.

What’s missing from the upcoming Dunk High, though, is any actual Lakers branding. Its gold, purple, and black color scheme — and similar typeface — seems to be enough for the Swoosh to nod to the basketball team. After all, Nike’s recent Air Max 95 meant to honor Lebron James sported the same shades, but in a mismatched rendition. Underfoot, though, James’ sneaker did tout the player’s number “23,” alongside his many achievements and honors. Perhaps there’s more to this forthcoming Dunk High than meets the eye.

The design says it all — Instead of just taking the same purple and gold colors from James’ Air Max 95, the Dunk High mixes up its upper with different textures. A purple hue hits the smooth leather overlays, while a black canvas is featured on the mid-panel, ankle, and toe box. The Dunk’s Swoosh stands out the most in a striking yellow color.

Towards the lower heel, embroidered Nike branding takes on a Lakers-inspired look. Black needlework, outlined in yellow, uses the same italic font as the iconic basketball team, even taking care to include the lines dragging away from the lettering. The design nods not only to the Lakers, but to the sneaker’s name, as EMB alludes to “embossed” (just as Nike has shortened comfort to CMFT).

Watch the clock — With the Dunk sneaker in demand more than ever before, and the honorary Lakers design, these shoes won’t be easy to cop. But while their SNKRS drop might subject the pairs to a lottery-based draw, the footwear is available elsewhere, thanks to their global release.

Select retailers have the Dunk High on sale for €120 (around $144), once they launch worldwide on April 29. If you’re looking to avoid international shipping and fees, though, you might want to stick with Nike’s SNKRS, where they’ll be dropping on the same date at 10 a.m. ET. Each pair will run for $110, but if you’re a Lakers fan, owning these is a priceless feat.