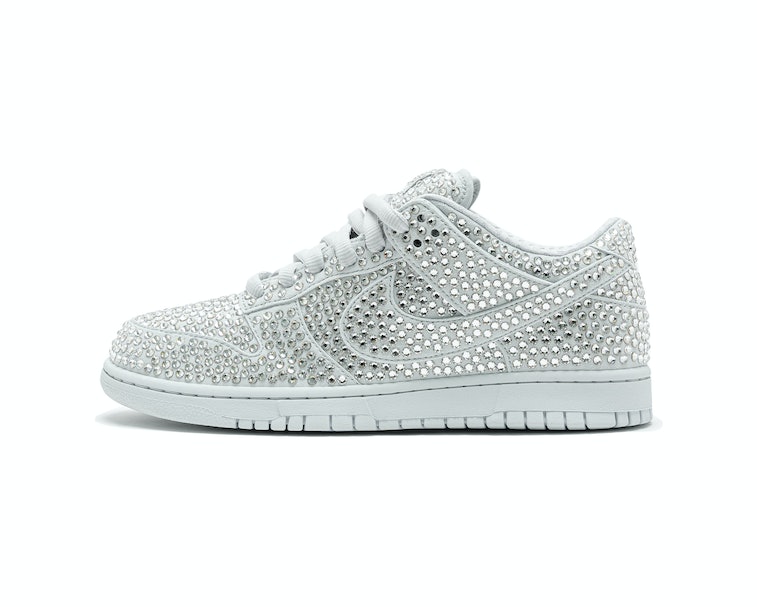 Cactus Plant Flea Market has outdone itself with its latest Nike collaboration. Using real Swarovski crystals, the Dunk Low has been transformed into a sneaker glitzy enough to rival a disco ball.

The crystals have been placed slightly uneven to fit in with Cactus Plant’s DIY aesthetic. And if you think the glam is a departure from the brand’s normal wares of sunshine and fauna, Nike has an explanation for that. By reflecting the light, the Dunks take an indirect approach to invoking the sun. Is this explanation a tad contrived? Sure, but it doesn’t take away from this reflective spectacle.

Some slight alterations to the silhouette — While it's hard to look at anything but the crystals, you may notice the Swoosh has been blown up similar to CPFM’s previous Blazer collab. The tongue also gets extra padding, and it’s up to you if you want to keep on the removable double lace flaps.

On the insole, you’ll find the splash of color we’ve become accustomed to with CPFM. Mismatched insoles have a sort of thermal pattern with "L" and "R" stamps designating the shoes’ respective foot.

More merch, more crystals — An asymmetrical "Just Do It" hoodie will release alongside the sneakers, and the lower case spell-out is also rendered in Swarovski crystals. Both of these will be exclusive to Cactus Plant Flea Market’s website, where they’ll undoubtedly be more expensive than you’re used to paying. Don’t forget, Supreme’s own Swarovski hoodie retailed for nearly $600.

A smiley face pendant with crystals and a dust bag without are also in the mix, although Nike hasn’t indicated when or where they’ll release. What we do know is that price and hype will make for an even more difficult cop this time around.