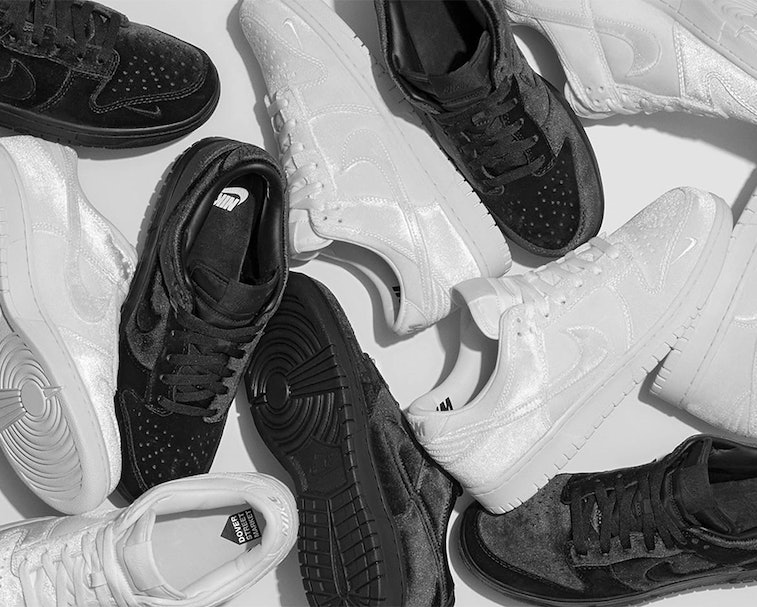 Dover Street Market confirmed via Instagram that its Nike Dunk Low collaboration — first previewed last May — officially launches this week. In tune with upcoming Valentine’s Day celebrations, the international boutique’s two sneakers are outfitted entirely in velvet, bearing a monochromatic look for easy styling. A third Dunk, which mixes the black and white shades of the former two, has been rumored but not officially announced yet.

Simplistic palettes and tasteful materials are a recognizable style of Dover Street Market, which last partnered with Nike and Comme des Garçons on an Air Foamposite One sneaker. Dressed in synonymous color choices, the shoe took inspiration from Japanese zen gardens with a rippled upper, quickly becoming a must-have for sneakerheads. DSM’s velvety Dunk Low should be no exception, especially considering the popularity of the Nike model.

Deluxe Dunks — Each panel of the sneaker comes dripped out in velvet, with the material covering everything from Nike’s signature Swoosh to its miniature version found near the toe. The soft material helps elevate the design of the Dunk, which remains fairly unchanged, giving us a new appreciation for the otherwise simple silhouette.

Matching linings, midsoles, and laces sit atop the soft upper, blending into the shoe for an overall clean look. Nike’s logo appears on the tongue and insoles alongside Dover Street Market’s own branding, solidifying the collaboration (and shared resale value) between the two. “DSM” replaces Nike’s usual heel markings on the right sneaker.

Two variations of the Dunk Low — one in black velvet and the other in white — have been confirmed by the boutique so far, although a third palette has been teased beside the monochromatic pairs. Mixing the black and white hues of the initial kicks, the unconfirmed design sports an equally plush upper albeit with a bit more contrast. Consider it the more realistic version of Nike’s “Panda” Dunks.

Vibing with velvet — As of now, only the two tonal pairs of the velvety Dunk Low have been slated for release, with each launching on February 5 at the Dover Street Market site and boutique locations. Both models are expected to retail for $180, which subjectively seems like a deal considering their limited availability. After all, how often are you stepping out in velvet?