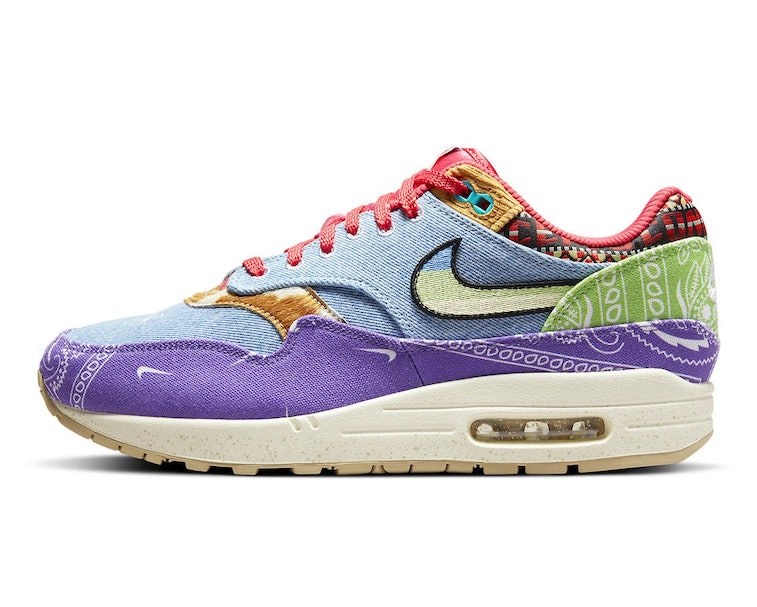 Boston-based sneaker boutique Concepts and Nike are readying for their third and final Air Max 1 celebrating the ‘60s.

The two previous iterations of the sneaker went maximalist with clashing colors and materials, and the “Far Out” variant is no different with a colorful array of washed denim, bandana print, corduroy, nylon, and even pony hair. Purple, blue, green, orange, and red make up the colorful upper and are balanced out by an off-white midsole and sand outsole.

Concepts has yet to announce the official release details, but a March 19 drop date can be expected based on the pattern of releases so far. Its arrival will come a week shy of Air Max Day, which this year commemorates the 35th anniversary of the Air Max 1.

It’s a party — Together, the three Air Max 1s made in collaboration with Concepts are the best versions of the sneaker celebrating its anniversary or at all in recent years. All three look back to the festival scene of the late ‘60s for inspiration, most notably Woodstock.

The trio kicked off with the “Mellow” variant, which was then followed up with the appropriately named “Heavy” version that made use of beefier materials. Beyond the concept, a floral Swoosh appearing only on the sneakers’ medial side forms a through-line for each release, as does a guitar pick that comes attached to the sneaker via chain.

It’s no exaggeration to say that the Air Max 1 is one of the most influential sneakers of all-time, as the design from the legendary Tinker Hatfield was the first to make Nike’s Air cushioning system visible. Such revelation of the inner workings of a sneaker are now standard for the brand, and Concepts’ take on the classic is exactly what it deserves.