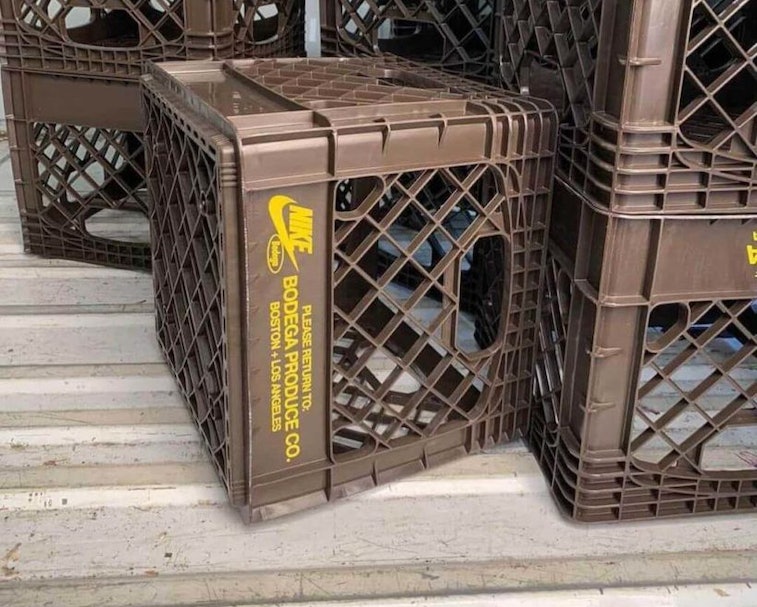 The milk crate challenge — which dares people to climb over a stack of precariously balanced crates — has dominated social media for the past week, meaning brands have begun their attempts at cashing in on the trend. Boston-based boutique Bodega teased co-branded Nike crates on its Instagram, hyping up consumers with the caption “challenge accepted.” Following suit, cult Instagram page Hidden.NY unveiled its own personally branded plastic bins, with no word on whether the crates would be sold.

Both brands could simply be using the branded crates as social media promotion, given the popularity of the challenge. Instagram commenters, however, are speculating the bins could be part of a giveaway or perhaps the labels’ own challenges: “Free Hidden socks if we complete this,” wrote one user under Hidden’s post. “Do I get free Bodega collaborations for life if I complete the challenge?” wrote another person on Bodega’s post. Still, neither brand has hinted at what the bins are for.

Consumers may never have the chance to try out the clout-chasing crates, however, as neither Hidden nor Bodega has revealed whether the boxes will be up for sale. But considering the silence from both labels, as well as the fleeting hype of the milk crate challenge, the branded bins are likely just for show. Hypebeasts looking to participate in the challenge will have to resort to regular milk crates, which they can always brand themselves if they’re really in need of a flex.

IYKYK — Social media trends come and go, as do the products made to cash in on them. Although it’s hard to say what challenge or meme may come across your feed next, it’s nearly guaranteed a brand will try to profit off it — already, there are rumors of a Supreme-branded milk crate and official photos of Supreme Shrek shirts. The more niche, and the more expensive, the better: The themed products make if you know, you know a tangible, and profitable notion.