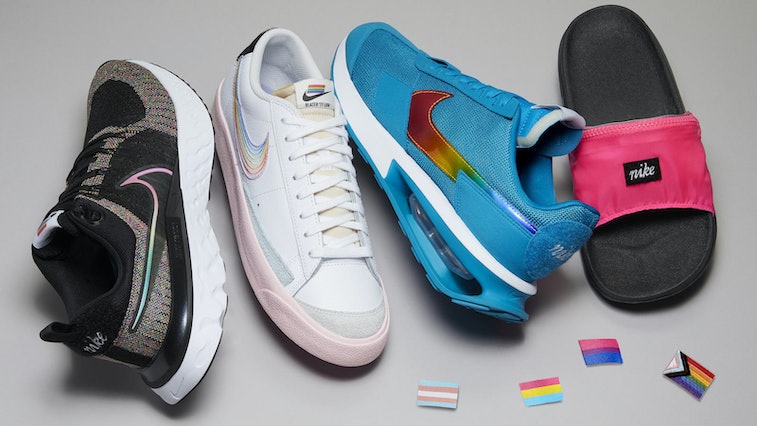 Now that June has rolled around, Nike’s ninth annual “Be True” collection is here to celebrate the LGBTQIA+ community, and empty its pockets. Featuring a diverse makeup of shoes, the brand hopes to encapsulate the various aspects of each Pride flag, even including flag patches that can be applied to this year’s iterations of the Blazer ’77 Low, Air Max Pre Day, All Out Utility Slide, and Infinity React Run 2.

Especially after recovering from multiple scandals in the past few months, Nike wants to assure its consumers that this Pride collection is anything but performative — the brand has highlighted its partnership with national and local organizations, such as the Human Rights Campaign (HRC).

Nike has also worked alongside Gia Parr, a trans HRC and Nike brand ambassador, in the release of its “Be True” collection. Parr told Nike that she found a “community” in sports, rather than turning to competition, and wants her coming out story to educate and inspire others. “Everyone can add to that bigger energy by telling their story,” she said.

A design for every person and occasion — As for Nike’s newest collection, the brand has strayed from an all-over rainbow design, instead opting to add the colorful aspect to each sneaker’s Swooshes. The ironically named All Out Utility Slide doesn’t bear a Swoosh, but a Pride flag can be applied on the pink sandal, which also seems to boast a stash pocket.

For a more athletic look, Nike has dressed its Infinity React Run 2 shoe in a multicolor FlyKnit upper. A pastel rainbow decorates the Swoosh for a more obvious approach to the theme — although, if you’re looking to go all out, you should opt for the brand’s “Be True” Air Max Pre Day. Sporting a bright blue color, the sneaker is hard to miss, and its holographic rainbow Swoosh makes the running sneaker suitable for everyday styling.

Nike’s lifestyle offering, the Blazer ’77 Low, takes on the rainbow look the most literally — its Swoosh resembles the colorful motif once turned upside down, thanks to its threaded design. A tan tongue and pink sole unit elevate the sneaker to one worth celebrating.

Dropping soon — To allow for a more personal approach, each footwear silhouette will come with a velcro patch, allowing the wearer to don any of the nine flags of the LGBTQIA+ community. Releasing just prior to major Pride festivities, Nike’s “Be True” releases June 7 in North America, with a global release following on June 15. All of the shoes will launch on Nike’s website, and be sure to grab them while you can — once they’re gone, they’re gone.