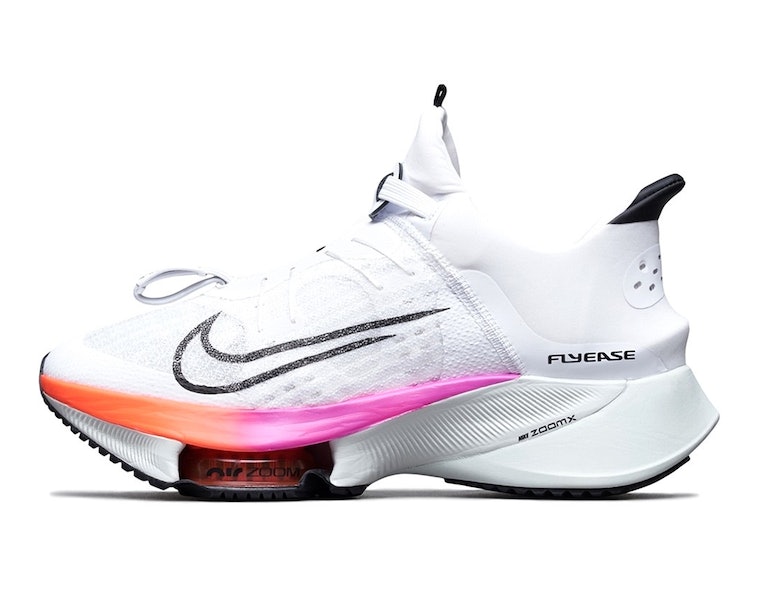 Nike's Next% family of running shoes, which includes the VaporFly Next% Eliud Kipchoge wore while breaking the marathon world record, has expanded to include FlyEase technology. The Air Zoom Tempo FlyEase Next% includes much of the same tech that makes the Next% series the fastest in the world but is designed more for everyday use. Because it's so easy to secure and take on and off, it's also ideal for anyone with a disability that limits the use of their hands.

FlyEase gives the sneaker a wider and more flexible entry point so that it can be slipped on and off with ease. To secure the laces, its wearer only needs to pull a tab where they'd usually be tied. They can then be loosened up by pulling on another tab toward the toe. "Lock," "Release," and "Step" text hits highlight these features while giving it a utilitarian look.

Nike's been bringing FlyEase to more sneakers — Nike first debuted FlyEase in 2015, but over the last year it's been applying the technology to an ever-expanding lineup of sneakers. The push comes as part of Nike's wider efforts to make the perfect sneakers for people with disabilities, which also include the self-lacing technology seen in the Adapt BB basketball sneaker.

While FlyEase was already in the works, lead designer Tobie Hatfield (and brother of the legendary Tinker Hatfield) found inspiration in a letter from a teenager with Cerebral Palsy who asked Nike to design a sneaker that was easier to get in and out of. Sophie Hahn, a Paralympic sprinter for Great Britain, has also said FlyEase technology makes it easier for her to train.

"I know this is quite embarrassing, but I’ve only just learnt to tie my shoelaces, and sometimes it’s a struggle with spikes and shoes," Hahn told Coach magazine. “I’ve pretty much overcome that but it’s not perfect. It’s why I’m super-excited about the Nike FlyEase shoe, which will go such a long way in helping me overcome day-to-day challenges when I’m training.

Designed for daily use — While the Vaporfly Next% and its more advanced successor, the Alphafly Next%, are intended for race day, the Air Zoom Tempo FlyEase Next% is equipped to hold up for much longer. The carbon fiber plate has been replaced with composite for more comfort over higher mileage, while ZoomX cushioning is combined with React for more durability and protection. Zoom Air pods at the forefoot carry over from the Alphafly Next%.

Due in September — While Nike hasn't yet set a firm release date, the Air Zoom Tempo FlyEase Next% is set to arrive sometime in September. Pricing also hasn't been confirmed, but it should be cheaper than the $250 retail for the Alphafly Next%. That money will go further with a shoe designed for daily use.