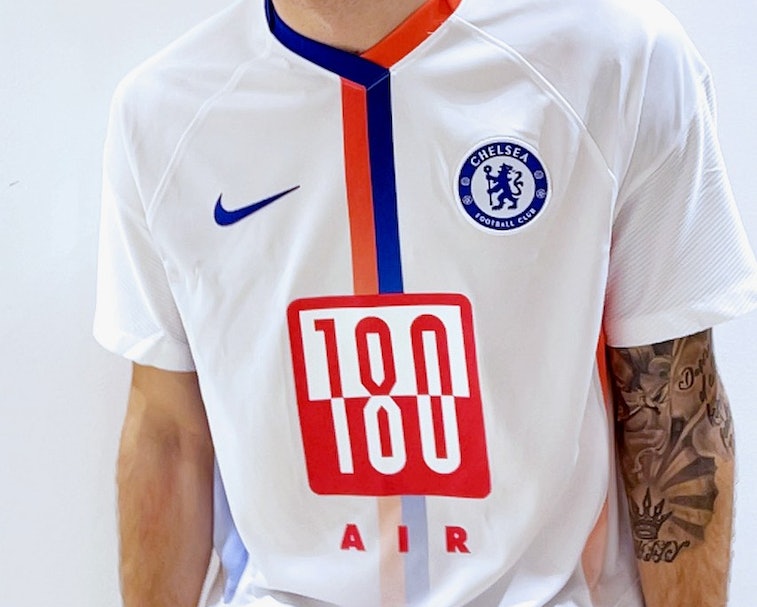 Nike has outfitted three of its four Premier League teams with jerseys to commemorate an Air Max sneaker. Liverpool, Chelsea, and Tottenham have been chosen to represent the Air Max 90, Air Max 95, and Air Max 180, respectively. (Brighton & Hove Albion, it seems, isn't big enough for the occasion.)

Each of the jerseys bears the same logo as the sneaker it corresponds with and is done up in the same colors as the original release. Unfortunately, a grand total of none of them are all that appealing — but the good news is that they're not destined for the pitch either. Nike is releasing them as lifestyle apparel and adjoining them with tracksuits, T-shirts, and jackets.

More like Air Mid — The Air Max series has been particularly popular in Europe, which makes it a shame that these commemorative jerseys are so lackadaisical. Chelsea's in particular sticks out for the fact that it doesn't manage to top its pajama suit away jersey and bootleg Crystal Palace third shirt, a remarkable low bar to hurdle. It looks like a lesser version of the team's mod-inspired away kit from last year, which was one of my favorites in years.

Tottenham's Air Max 95 shirt has the ever-appealing "Neon" color scheme, but the block stripes are dull compared to the waves on the sneaker. Putting the club's crest and the Swoosh atop the Air Max logo at the center of the shirt is another strange choice, leaving too much negative space where we're used to seeing the patches.

Liverpool, the crown jewel of Nike's Premier League roster, has been given the worst shirt of them all. Baseball-esque pinstripes on the torso are surrounded by bold blocking on the shoulders and sleeves — and yet, for all that's going on, it's mundane.

The Daily Mail has caught wind — The UK's premier destination for long-winded and gossipy headlines has captured fans' displeasure in an article called, "'You plan to charge people real money for this?' Fans slam Liverpool, Chelsea and Tottenham's 'absolutely awful' new retro Nike Air Max collection shirts on sale for £70 — even though they won't be worn on the pitch!"

"Absolutely awful" may be a bit harsh — I'd go with "astonishingly average" — but it's a headline to revel in. If, for some reason, you'd call them "purchasable," you can do so on the team's respective webstores.