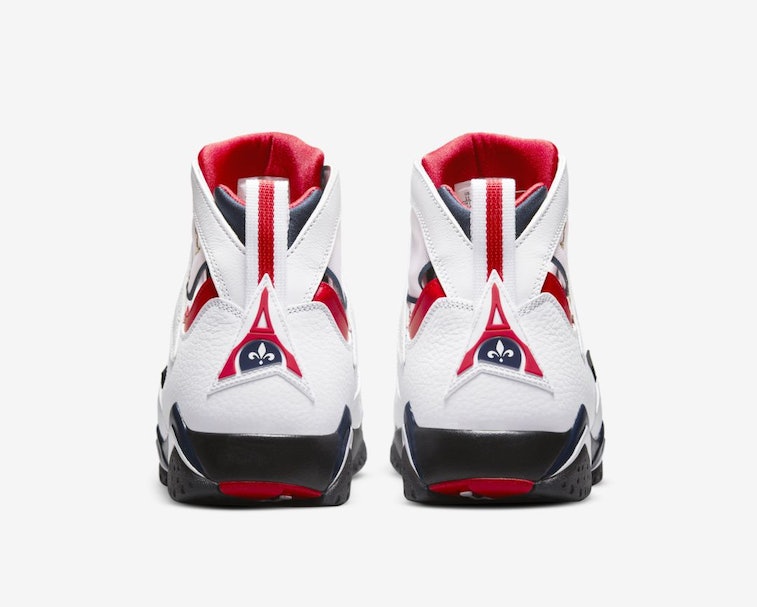 Paris Saint Germain’s Air Jordan lineup continues to grow, as images of a PSG Air Jordan 7 have surfaced. Sneakerheads will notice it looks a lot like the heralded Air Jordan 7 “Olympic,” as the soccer club’s colors are used almost identically to the U.S. National Team’s. All that’s missing are silver accents — but the sneaker isn’t any less attractive for its comparisons.

This latest shoe will mark PSG’s sixth from the Air Jordan line, the most recent of which is the Air Jordan 1 with Zoom Air added. The club has also had several collaborations on other (lesser) shoes from Jordan Brand as part of a fruitful partnership that began in 2018 with PSG becoming the first soccer team to wear on the Jumpman on its kits.

The first Air Jordan to release for PSG was another Air Jordan 1 with an all-black upper with a red, white, and blue ribbon on the midsole and tongue. Looking back, their sneakers have gotten better over the years — even if it’s started to crib more from existing color schemes.

Parisian flair — Unlike previous collaborations save for the first Air Jordan 1, the PSG badge is nowhere to be found on the sneaker. The branding is more subtle, including a “Paname” tag that’s made mast appearances and is another word for “Paris.” In place of the heel’s “23” hit, or “9” on the “Olympic” version, is the fleur-de-lis that’s been used throughout French history.

Inside, you’ll find a insole with the words “Ici C'est Paris,” the name of PSG’s club song that translates to “This is Paris.” These same words also appear to be visible underneath one of the upper’s see-through mesh panels — the most significant deviation from the Air Jordan 7 “Olympic.” Rounding things out is a box adorned with the PSG crest, which may just make the prospect of throwing it out even more difficult.

Stay tuned for release details — The first images of PSG’s Air Jordan 7 come from the sneaker leak account J23, and no official release details have yet been announced. Don’t be surprised if it drops relatively soon, though, as PSG and Jordan Brand have churned out more than a dozen shoes in total over three short years.