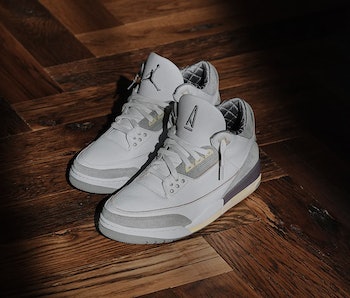 With a highly anticipated release only days away, A Ma Maniére has announced official details on its upcoming Air Jordan 3 collaboration. Starting April 14 through April 17, women will have first access to the sneaker via an in-store raffle at A Ma Maniére locations in Atlanta, D.C., and Houston, while a general raffle begins April 16 online. The luxurious Air Jordan 3 will then officially launch April 21 on the boutique’s website.

A Ma Maniére has carefully curated hype around its Air Jordan 3, and after delaying the silhouette due to “unexpected delays,” even more sneakerheads will be waiting to jump on the silhouette. Plenty are looking forward to the upcoming release as the collaborative sneaker is set to arrive in full family sizing — not just women’s, as previously rumored — with adult pairs priced at $200 and preschool pairs at $90. Even the smallest shoes will go fast, though, and those who want to cop need to plan accordingly.

A W for Women — The boutique has centered the silhouette around women, initially hyping up the shoe through a teaser video dubbed “Raised by Women.” As such, women consumers have been prioritized through an in-store women’s-only raffle. To enter, women may set an appointment through the A Ma Maniére website, ensuring an in-store spot to have their government ID and shoe size confirmation for the raffle. The authorization inhibits most resellers from cheating the system, and guarantees women can enter for the chance to win a few pairs — but only if they live close to the participating Atlanta, D.C., and Houston boutiques.

In a press release, A Ma Maniére owner James Whitner explained that “it has been our priority all along to ensure women, especially Black women, have access to this very special project as it launches. Our team has worked hard to ensure we are able to change the narrative on special launches and we are here to redefine what it means to serve Her first.” Multiple women will have a chance to win the boutique’s luxurious Air Jordan 3 in the early raffle, with winners selected before the official release on April 21.

Women who don’t live near a boutique, however, will have to join the general raffle, starting April 16, alongside other sneakerheads ineligible for early access. Running until April 18, the raffle is open to all online, but interested consumers must first follow A Ma Maniére’s Instagram and Twitter accounts. Only one lucky person here will win a pair of the collaborative sneakers.

Highly limited and highly coveted — If all else fails, everyone can try to cop the coveted Air Jordan 3 on April 21, where the sneaker will drop on A Ma Maniére’s website and an additional A Ma Maniére projects website. The sneaker is extremely limited — and desired by many — so make sure to prepare prior to the 12 p.m. ET drop time.