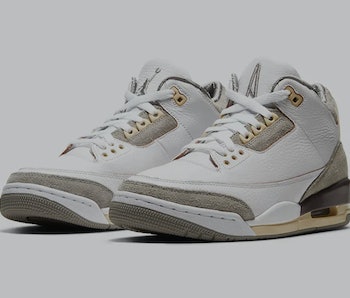 If you initially missed out on A Ma Maniére’s luxurious Air Jordan 3, Nike has given you another chance to score the sneaker at retail price. The brand announced it would drop more of the collaborative shoe this month on SNKRS.

With the coveted design first scheduled to drop on March 30 — over two months ago — plenty of dedicated sneakerheads have followed the Air Jordan 3 through delays and raffles in a bid to secure the silhouette. And as demonstrated by the previous drops, people are willing to do anything for A Ma Maniére’s shoe — even if that means entering your mom into a women’s-only raffle for the sneaker. Let’s hope Nike SNKRS is prepared for the overwhelming demand.

Will SNKRS follow AMM’s lead? — A Ma Maniére has already been praised for its rollout, especially as the boutique centered its drop around Black women — a huge demographic of the sneaker community too often left out. The Air Jordan 3 was initially hyped up through a teaser video dubbed “Raised by Women,” where Black women could be seen running businesses, raising children, modeling, and more, all while donning their luxurious AJ3 sneakers.

Women were also given first access to the shoe via an in-store raffle, where they had to show their government ID and shoe size to inhibit resellers from cheating the system. It’s unclear if Nike will give women a similar priority — like when it gave women exclusive access to its Off-White Air Jordan 4 “Sail” — or if the sneakers will be subjected to a lottery-based draw.

Only about a month after the Air Jordan 3’s release on A Ma Maniére’s website, the women’s sneakers are reselling for up to $560. With demand higher than supply, Nike’s SNKRS launch will likely be filled with just as many sneakerheads as resellers.

Score a 10 on the 10th — Despite its multiple delays, A Ma Maniére pulled off a drop as clean as its Air Jordan 3 — but can Nike do the same on SNKRS? The brand has fumbled highly-anticipated drops in the past, with its SNKRS platform crashing due to overwhelming demand and leaving consumers sneaker-less or paying insane resale prices.

Since switching over to lottery-based draws, which Nike applies to nearly every Dunk or coveted design, SNKRS has yet to see any monumental flops. The method seems to allow the platform to keep up with demand — but this A Ma Maniére drop will serve as the ultimate test. Nike’s SNKRS launch on June 10, at 10 a.m. ET, is consumers’ last chance to cop the collaborative Air Jordan 3 for its retail price of $200. If you miss out again, you’ll be stuck paying hundreds for resale.