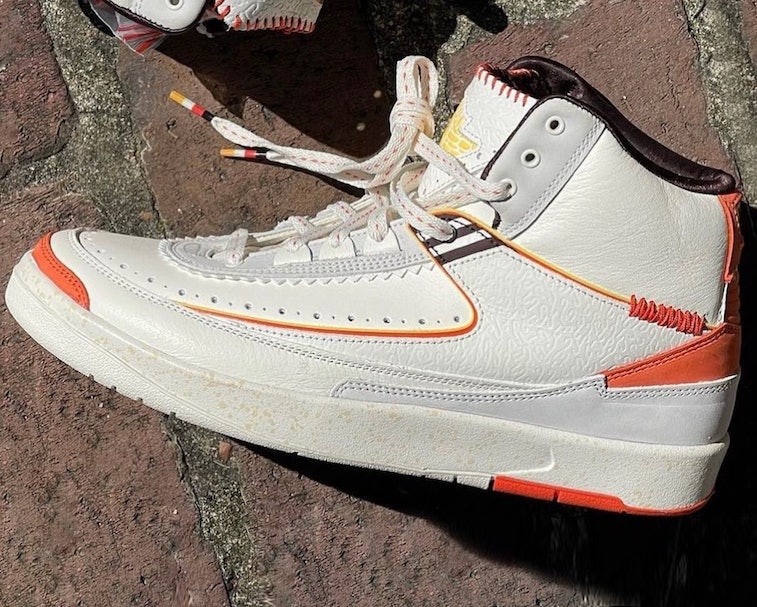 The Air Jordan 2 continues its revival with the sneaker taking a trip to Paris by way of Africa.

French boutique Maison Château Rouge, which specializes in African-influenced apparel, is collaborating with Jordan Brand on one of the more polarizing sneakers from the Air Jordan line. But whatever you think of the silhouette at its core, it’s hard not to be impressed by Maison Château Rouge’s take on the kicks.

Images taken by Teddy Soles show the Air Jordan 2 taking on brogue elements with perforated and serrated detailing. A creamy white makes up the majority of the upper, with hits of warm colors coming through in orange, yellow, and brown. A debossed pattern also appears on the overlay and tongue, and ornamental stitching is added to cap off the mix of textures.

The AJ2 is buzzing — The Air Jordan 2 is one of the less popular sneakers from the early years of the Air Jordan line, and it doesn’t help that it’s bookended by two of the most acclaimed sneakers of all-time. The Air Jordan 1, of course, was the beginning of Michael Jordan’s sneaker legend and a catalyst for the culture. And then there’s the Air Jordan 3, the first Air Jordan designed by Tinker Hatfield and the very shoe that convinced Jordan to not leave Nike.

Over the last year, Jordan Brand has signaled its intent to shift the narrative on its middle-child sneaker. Off-White brought immediate hype to the silhouette in November, and highly anticipated collaborations with Union, A Ma Maniére, and J Balvin are all on the way.

Maison Château Rouge, in its own take on the shoe, does a great job of making the show feel more worldly through all the intricate details. The insole also sees a shot from Michael Jordan's first Dunk Contest adopted as part of an African-inspired graphic that’s a shame to keep hidden away. Release details for the sneaker are likely still a bit far away, but we can probably expect the Air Jordan 2 to release some time in the coming months.