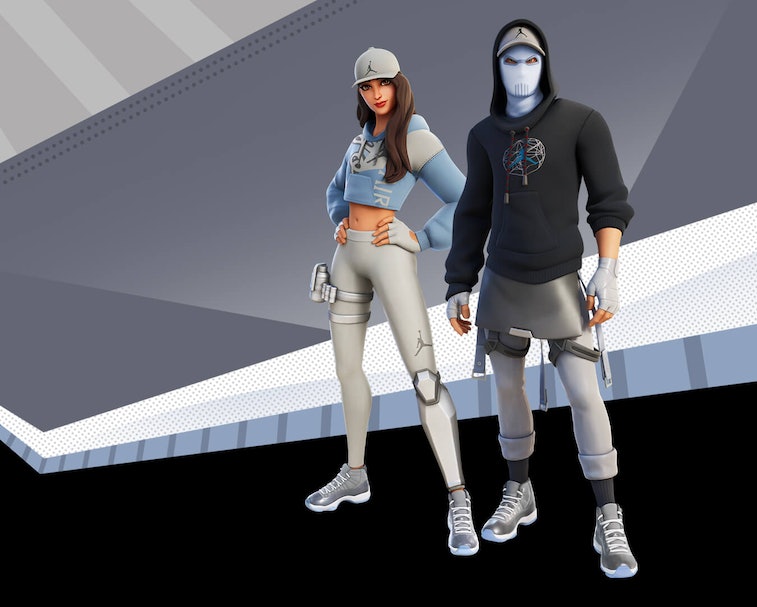 Shortly after Nike and Roblox created Nikeland, a Swoosh-branded digital world, Jordan Brand is reuniting with Fortnite to commemorate the long-awaited return of the Air Jordan 11 “Cool Grey.” The sneaker’s reissue — only its third since it was first released in 2001 — falls on its 20th anniversary, and is a serious event for Jordan collectors.

To celebrate the Jordan 11’s re-release, Jordan Brand and Fortnite have launched new outfits and cosmetics within the game, as well as an interactive experience in the game’s creative mode called “Jumpman Zone.” Much like Nikeland, which is filled with virtual mini-games, Jumpman Zone allows gamers to explore scavenger hunts and challenges to unlock exclusive Jordan Brand content.

Cyber clout — Within Fortnite, you’ll be able to dress your emote in four new outfits and cosmetics, including a digital version of the Air Jordan 11 “Cool Grey.” Dubbed the Hangtime Outfit, the Swish Outfit, and the Cool Grey Back Bling, the clothing sets offer Jordan-branded hoodies, leggings, and hats in metallic silver, blue, gray, and black tones to align with the “Cool Grey” sneaker. Alongside the shoe’s virtual release, gamers will also have access to “Dunk On ‘Em” emote, showcasing their character’s dunking skills.

More can be unlocked in the Jumpman Zone feature, where users are able to explore scavenger hunts to discover Air Jordan 11 “Cool Grey” artifacts. Completing Trickshot Challenges within the game will also unlock Jumpman-inspired MVP areas, like a Jordan Brand museum, basketball court, and immersive video commemorating the return of the icy Air Jordan 11.

Cop the “Cool Grey” — Jordan Brand’s digital digs go live on Fortnite at 7 p.m. ET on December 1. The actual “Cool Grey” sneaker will be much harder to get, however, and doesn’t release until 10 a.m. ET on December 11. You’ll want to try purchasing the shoe wherever it’s available, starting with Nike’s SNKRS app and including third-party retailers like Foot Locker and Finish Line. Copping the tangible Air Jordan 11 may be a feat much harder than a Fortnite challenge.

Yet Jordan Brand’s partnership with Fortnite — which began in 2018 — is a great example of how Nike hopes to connect with younger generations through gaming and virtual reality. As the metaverse becomes a new forefront for retail, brands are using digital products to encourage real-world sales, and Nike’s continuation of cyber collaborations seems to insinuate the move is working. Soon, we could regularly see digital drops accompanying real ones, with a growing value attached to the virtual iterations.

The gaming challenges promise digital drip, but no guarantee to the real deal.