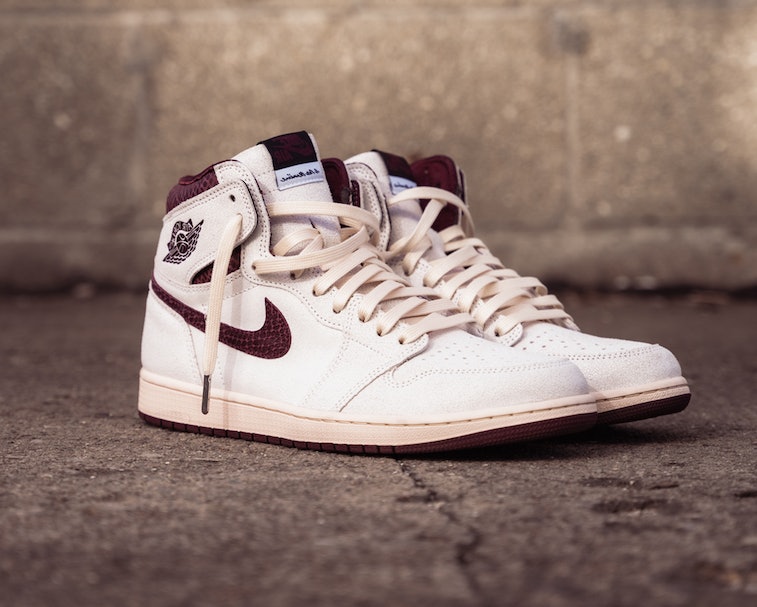 After images first surfaced earlier this month, Atlanta-based boutique A Ma Maniére has confirmed the release for its luxurious take on the Air Jordan 1. The multi-textured sneaker marks A Ma Maniére’s second Jordan collaboration of the year and cements a design language that makes the boutique an auspicious creative partner for Jordan Brand going forward.

Similar to the Air Jordan 3 released earlier this year, A Ma Maniére’s Air Jordan 1 features a quilted collar — one of several material changes that makes the sneaker stand out. A fine cracked leather in cream is used for the upper, while the Swoosh and collar come in a burgundy snakeskin texture.

Upon announcing the release of its Air Jordan 1, A Ma Maniére says the sneaker is “inspired by the realities of daily life in Black communities across the country,” adding that it’s “a symbol of resilience in the face of adversity and a testament to the power of unity.”

A collegiate clothing capsule is also coming — Releasing alongside the Air Jordan 1 on November 24 will be collection of clothing inspired by collegiate iconography. The capsule looks to be an in-house release, and not made in collaboration with Jordan Brand, with pieces including a varsity jacket and hockey jersey.

The sneaker itself features even more details than initially meet the eye, including a quote from Michael Jordan printed underneath the ankle flap along with his signature. “You have to expect things of yourself before you can do them,” the text reads, which fits into A Ma Maniére’s messaging of uplifting the Black community.

A Ma Maniére is giving priority to locally based customers, and a sign-up slots are open here for in-store appointments in Atlanta, Houston, and Washington D.C. between November 15 and November 18 in order to participate in a raffle to purchase. The boutique’s website will also release the sneaker at in limited stock at 10 a.m. November 24, the day prior to Thanksgiving.

With the holiday sneaker releases just starting to begin, A Ma Maniére may stamp its place early as the best of them all.